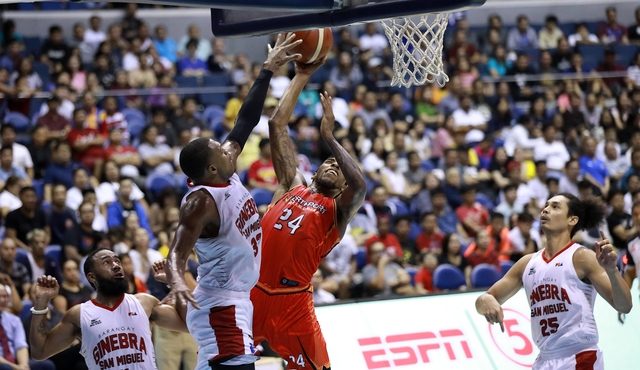 MANILA, Philippines – NorthPort punched one of the last two quarterfinal tickets in the 2019 PBA Governors’ Cup with a 98-96 win over Barangay Ginebra at the Araneta Coliseum on Sunday, November 17.

Import Michael Qualls shone on both ends with 30 points, 13 rebounds, 5 assists, 3 steals, and 2 blocks as the Batang Pier avoided an early vacation by winning their last two games to improve to 5-6.

NorthPort will land either at 7th or 8th place depending on the result of the final game of Alaska (4-6), which could complete the playoff cast with a win over NLEX on Wednesday, November 20.

The win came with a scare, though, after Paolo Taha split his foul shots for the Batang Pier with an eighth of a second left, giving the Gin Kings enough time to either force overtime or steal the win.

But Barangay Ginebra – bothered by the pesky NorthPort defense – settled for a long Jeff Chan three-pointer which ultimately missed at the buzzer as it ended the elimination round with a 7-4 card.

Sean Anthony finished with 18 points, 6 rebounds, 6 assists, and 5 steals for the Batang Pier, while Christian Standhardinger had 17 points and 11 rebounds.

The NorthPort win also eliminated Rain or Shine from contending for at least a playoff for the last quarterfinal berth.

Even if Rain or Shine ends up in a three-way tie at 4-7 with Alaska and Columbian for the final playoff spot, it will still get the boot due to an inferior quotient accumulated from the games between the 3 teams.

Kevin Ferrer added 11 points and 5 rebounds for the Batang Pier.

Import Justin Brownlee put up 31 points and 9 rebounds to lead the Gin Kings, whom despite the loss will enjoy a twice-to-beat incentive in the quarterfinals.

Stanley Pringle churned out 18 points, 5 rebounds, and 5 assists, LA Tenorio had 15 points, 7 rebounds, and 4 assists, while Japeth Aguilar racked up 14 points and 9 rebounds in the defeat.