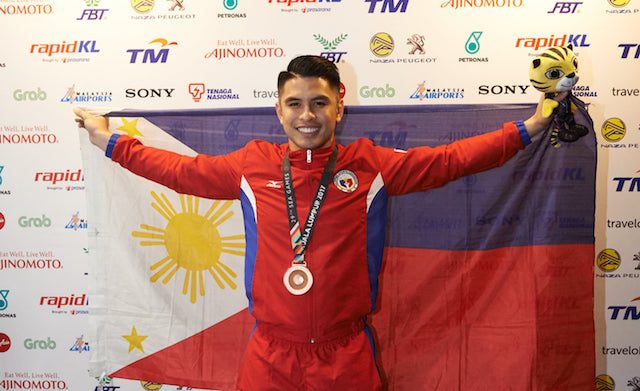 MANILA, Philippines – Top Filipino karateka James de los Santos posted a lengthy story on his Facebook about how he got “robbed” of his national team slot for the 2019 Southeast Asian Games.

The 2017 SEA Games bronze medalist in the men’s individual kata event, who is also the reigning six-time Philippine National Games (PNG) gold medalist, revealed how his national sports association (NSA) Karate Pilipinas Inc (KPI)  “wrongfully” evaluated him for the national team that will compete in the regional meet the country’s hosting starting November 30.

“In a national team meeting, I was informed that there will be an evaluation for the Men’s Senior Individual Kata dated on November 7, 2019, which was exactly one month before the karate event of the SEA Games. I got confused to why there was an evaluation so near the SEA Games,” wrote De Los Santos.

“Then I thought again, that going back to the month of August when I was abandoned in Manila without proper coaching or plan, the NSA (KPI) already made up their mind on the SEA Games lineup.”

“Despite trying to stay positive, I had a feeling that my fate was already sealed and this evaluation was just being orchestrated, to give them an ‘official reason’ to not include me in the SEA Games lineup. As I’ve heard, the deadline for the NSA to submit the SEA Games lineup was October 2019.”

“The result of the evaluation: I was not included in the SEA Games lineup.”

De Los Santos emphasized that the evaluation was held under closed doors and the panel present was “not qualifed to judge international kata” as they were kumite coaches.

In preparation for the SEA Games, De Los Santos was left to train on his own and was forced to find a sponsor to fund his training in Japan as the KPI did not extend financial support to him.

“During my stay in Japan, I learned many things that I never acquired during my previous years in the national team,” added the treasurer of the Athlete’s Commission.

But the coaches under KPI, he said, continued to snub his skills and evaluation results.

“The Foreign Kumite coach and local Kata coaches had the nerve to tell me, that my performance went down, and told me not to go back to my sensei in Japan. Who are they to criticize my Japanese sensei? My sensei in Japan is well-respected and has produced champions and currently has players in the Japan National Team. What [has] the Philippine National Team Kata coaches produced? Who are their champions?”

De Los Santos told Rappler that he has elevated the issue to Philippine Sports Commission (PSC) chairman William “Butch” Ramirez, but the government’s sports agency chief argued that he has “no jurisdiction” over the internal decisions of the NSAs.

According to KPI president Richard Lim, De Los Santos did not pass the standards of the national team coaches and the foreign head coach for “many reasons.”

“Many reasons. Past and present performance and final selection [are] done by the coaches and our foreign head coach,” Lim told Rappler.

De Los Santos, though, admitted that he failed to medal in the 5 high-level senior tournaments he joined after the 2017 SEA Games.

The embattled karateka reasoned that it was difficult to win as the NSA never provided proper training and coaching throughout that time period.

“Yes, you (Lim) sent me to high-level tournaments, but I was not trained properly for them. That is why the whole team was not winning  in these tournaments,” said De Los Santos.

De Los Santos argued that the Philippines only bagged two bronze medals from these high-level tournaments in almost two years, yet he was singled out and replaced by a junior karateka, who has not recorded a win over him.

“The one replacing me in the upcoming SEA Games has achievements in the juinor level. He is the son of the KPI Vice President (Alejandro Enrico Vasquez),” revealed De Los Santos in his post.

“This kata player that they are replacing me with had the opportunity to compete with me in front of World Karate Federation referees at the last PNG senior level in 2018, and he chose not to.”

KPI replaced the defunct Philippine Karatedo Federation-NSA (PKF-NSA), which was disassociated with the international federation due to alleged misuse of funds, leaving the national karatekas in the hands of the PSC and Philippine Olympic Committee (POC).

De Los Santos was also one of the members of the Philippine team who came forward to expose the corruption they experienced as they failed to receive the full amount of their allowance during a 20-day training in Germany before the 2017 SEA Games.  – Rappler.com