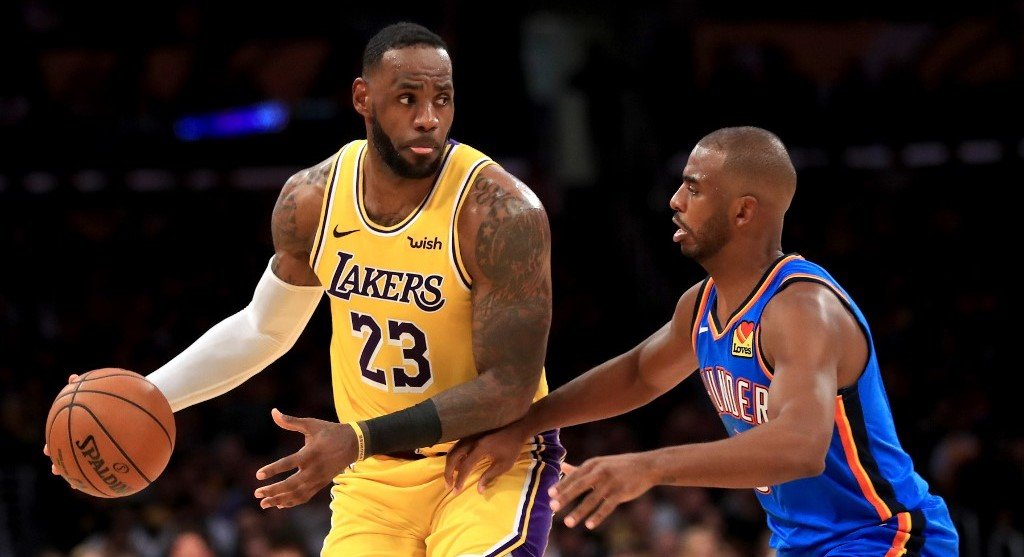 LOS ANGELES, USA – LeBron James became the first player in NBA history to record a triple-double against every team in the league on Tuesday, November 19 (Wednesday, November 20, Philippine time) as the Los Angeles Lakers powered to victory over the Oklahoma City Thunder.

James finished with 25 points, 11 rebounds and 10 assists in a hardfought 112-107 win over the Thunder at the Staples Center.

Anthony Davis led the Lakers scoring with 34 points, while adding 7 rebounds and 4 assists.

The win saw the Lakers improve to 12-2 to remain on top of the Western Conference.

But it was James’ 86th career triple-double that grabbed the headlines, the Lakers star sealing the milestone with an assist to Davis with just over 4 minutes remaining in the 4th quarter.

James said the record would not have been possible without the support of coaches and teammates over the years.

“I really don’t know what to think about it to be honest,” James told reporters when asked about the feat.

“Hopefully in all those triple-doubles I’ve got a winning record because that’s what’s most important. But it’s a pretty cool stat and I’m glad it happened.”

Houston’s Russell Westbrook is hard on James’ heels with triple-doubles against 29 of the league’s 30 teams.

Westbrook would complete his set with a triple-double against his former team Oklahoma City, who he left this year.

In New Orleans, Carmelo Anthony made an unsuccessful return to the NBA after more than a year out of the game as the Portland Trail Blazers slumped to a 115-104 loss to the Pelicans.

Anthony, whose move to Portland was confirmed by the team earlier Tuesday, finished with just 10 points after 23 minutes on court after shooting just 4-of-14 from the field.

It was a largely frustrating night for the 35-year-old 10-time All-Star, with Portland giving up 17 turnovers as the Pelicans dominated a shaky Blazers defense.

Anthony however was simply happy to have made his return to the league, just over a year after he was released from the Houston Rockets.

“My body felt good, better than what I expected,” Anthony said. “It was cool.

“I just enjoyed being back out there, getting into the flow of things, the routines, putting the uniform on and getting up and down the court.”

Jrue Holiday led the scoring for the Pelicans with 22 points while Brandon Ingram had 21 points off the bench.

In Memphis, the crisis-hit Golden State Warriors ended a seven-game losing streak with a comfortable road victory over the Grizzlies, winning 114-95.

Although the Warriors continue to prop up the Western Conference standings with three wins against 12 defeats, the Dubs’ injury-ravaged line-up drew confidence from a deserved win.

Alec Burks finished with 29 points while Glenn Robinson III had 20 points as the Warriors scored a morale-boosting victory.

“We came in fighting,” Warriors veteran Draymond Green said. “We’ve been talking about improving our defense each and every time we step on this court. Tonight we showed it.”

Warriors coach Steve Kerr, who has seen his roster decimated by injuries, hailed what he called a “great win.”

“I’m just happy for the guys,” Kerr said. “They’ve been playing hard and working hard. It’s good to see them rewarded because they’ve kept their energy up through all this. Losing sucks and losing seven in a row is miserable.”

Elsewhere Tuesday, Bogdan Bogdanovic had 31 points from the bench as the Sacramento Kings downed the Phoenix Suns 120-116.