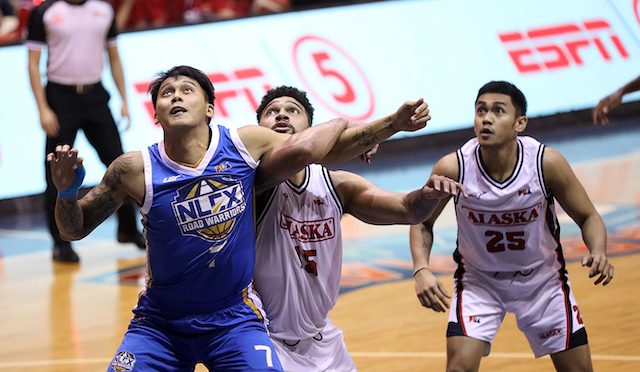 Facebook Twitter Copy URL
Copied
After a horrendous 0-5 start, Alaska completes an incredible turnaround to barge into the quarterfinals

ANTIPOLO CITY, Philippines – Alaska completed the quarterfinal cast in the 2019 PBA Governors’ Cup with a masterful 106-90 manhandling of NLEX at the Ynares Center on Wednesday, November 20.

Import Franko House and 5 of his teammates finished in double figures as the Aces barged into the playoffs after a horror start to the conference, taking down none less than the league-leading Road Warriors.

Despite winding up with the same 5-6 record as NorthPort, Alaska will take the No. 7 seed in the quarterfinals by virtue of a win in their elimination round matchup and will face the No. 2 team in the playoffs.

It was a massive turnaround for the Aces, who spent the first few weeks of the conference at the bottom of the standings after dropping their first 5 games before winning all but one of their last 6 outings.

House was at the forefront of the attack with 24 points, 8 rebounds, and 5 assists – scattering 18 points in the first two quarters that saw Alaska enjoy a lead as large as 22 points, 61-39.

NLEX never recovered from its rocky first-half showing as it failed to trim its deficit to single digit in the second half.

Abu Tratter, JVee Casio, and Kevin Racal each had 12 points and conjoined for 17 rebounds in the win, while Vic Manuel and Robbie Herndon added 10 points apiece.

Import Manny Harris delivered 22 points, 9 rebounds, 6 assists, and 4 steals for the Road Warriors, who despite wrapping up the elimination round with an 8-3 record, will still finish No. 1 heading into the playoffs.

The Road Warriors will face the Batang Pier in the quarterfinals boasting of a twice-to-beat incentive.