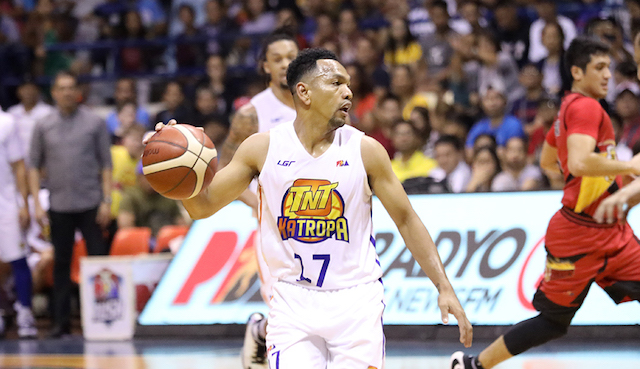 ANTIPOLO CITY, Philippines – It probably wasn’t a coincidence that TNT snapped its three-game losing streak in the PBA Governors’ Cup just as Jayson Castro returned from a month-long injury layoff.

On a roll winning its first 7 games of the conference, TNT lost its last 3 matches since Castro was sidelined by a soleus muscle strain on his right calf late October.

But with the coveted playoff bonus at stake, Castro returned just in time, barely looking like he had been sidelined as he delivered a near triple-double performance of 12 points, 11 rebounds, and 9 assists.

“We’re extremely organized,” TNT forward Troy Rosario said in a mix of Filipino and English when asked about the difference with Castro back. “We know what kuya Jayson can bring to the team.”

“He’s been our leader and he’s the one who organizes us.”

TNT coach Bong Ravena said Castro’s return boosted the players’ morale, especially since the team turns to the veteran guard whenever the going gets tough.

“It’s a huge deal for us having him back. We really need him inside. We can’t afford to just have him on the sideline. He’s the heart of the team,” Ravena said.

For Castro, he was just glad to help right the ship for TNT, which will tangle with defending champion Magnolia on Monday, November 25.

“I’m glad I was able to help the team and at the same time see [KJ McDaniel] and Troy [Rosario] regain their confidence because in the last 3 games, they were out of rhythm, especially our import,” Castro said. – Rappler.com