Nov 24, 2019 5:36 PM PHT
Delfin Dioquino
Facebook Twitter Copy URL
Copied
'It wasn't ideal. We had to wait maybe like 8 or 9 hours to get our hotel. But things happen,' says Cambodia football Felix Dalmas 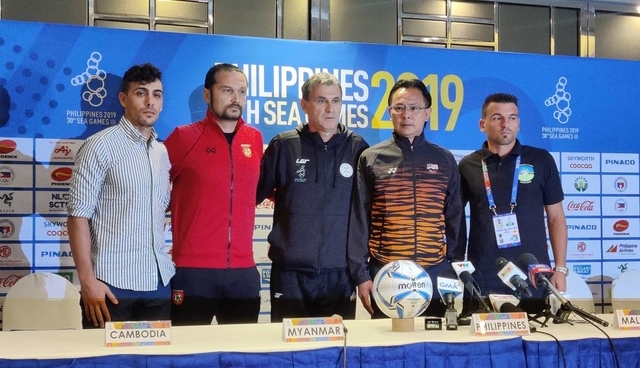 MANILA, Philippines – The need for a better organization of the Southeast Asian Games has been raised by the Philippines’ rival football teams after encountering problems upon their arrival in the country.

Several social media posts surfaced over the weekend narrating how the teams waited for hours for their service buses to pick them up from the airport and for their hotel accommodation to be finalized.

“Obviously, somebody didn’t do his job the best possible way because everybody knows our shuttle when we need to arrive, there was no bus,” Myanmar head coach Velizar Popov told reporters.

“We waited almost an hour. After that comes a small kind of bus that was difficult to enter normally,” Popov added after their press conference on Sunday, November 24, at the Century Park Hotel.

Myanmar football team coach Velizar Popov hopes "everything about the organization" of the #SEAGames2019 "to be better" after encountering problems upon their arrival in the country. | @dioquinodelfin pic.twitter.com/tGYqEkVGMA

Like Myanmar, Timor Leste had to wait at the airport for almost 3 hours for their shuttle only to be brought to the wrong hotel.

Meanwhile, Cambodia spent almost half a day at a hotel conference room since their rooms were not ready yet.

Thailand also experienced inconveniences and had to cancel practice because organizers scheduled it at the Biñan Football Stadium in Laguna, which takes two hours to reach from Metro Manila.

As the posts blew up, the Philippine Southeast Asian Games Organizing Committee (PHISGOC) apologized to the teams, saying the incidents “remain a constant reminder for us as organizers to be more diligent.”

While it was not the way they probably would have liked to start the tournament, the teams are taking the issues in stride.

“Now we’re well-rested, we had to change some things, but we prepared, we know things are not perfect, especially when you’re not the home country,” said Cambodia tactician Felix Dalmas.

“It’s time to move on and just focus on the soccer.”

Cambodia coach Felix Dalmas reveals he and his team had to wait 8 or 9 hours for their hotel upon their arrival in the country for the #SEAGames2019.

But he says "it's time to move on and focus on the soccer." | @dioquinodelfin pic.twitter.com/3rBT3zIVwV

Popov expressed hopes that there will be improvement the next time.

“It’s a small issue for me, it’s no big deal. I don’t want to talk more about that because it’s not the main thing in this tournament. No need to look for excuses, obviously the other teams also have the same problems,” Popov said.

“But I hope in the future, everything about the organization to be better.”

The football competiton kicks off on Monday, November 25, at the Rizal Memorial Football Stadium, despite the ongoing renovation. – Rappler.com