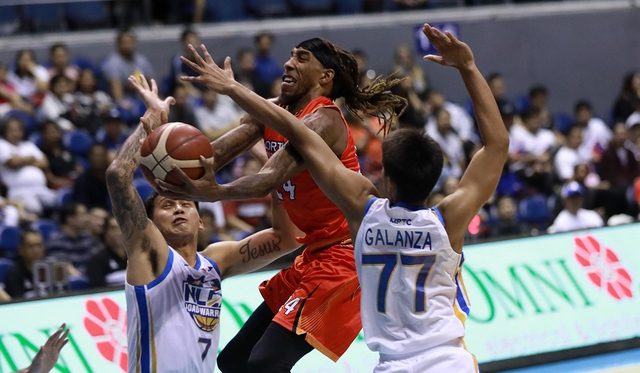 MANILA, Philippines – Import Michael Qualls survived a hit to the head and helped NorthPort stay alive in the 2019 PBA Governors’ Cup with a 115-90 quarterfinal win over NLEX on Monday, November 25.

Qualls delivered 39 points, 16 rebounds, 5 assists, and 2 steals, bucking a strong elbow to the head from Poy Erram as the No. 8 Batang Pier erased the No. 1 Road Warriors’ twice-to-beat incentive.

A contender for the Best Import award, Qualls was just a different beast with NorthPort having its back against the wall, draining 22 points in the first half that saw his side enjoy a 61-40 cushion at halftime.

But NLEX – which came back from a 20-point hole and won twice this conference – did not crumble and narrowed the gap to 81-95 with less than 6 minutes left off back-to-back Kiefer Ravena and JR Quiñahan shots.

It did not help the Road Warriors’ cause, though, after Erram and Paul Varilla were ejected for both incurring flagrant foul penalty 2 for landing elbows on Qualls and Christian Standhardinger.

Qualls happened to step on Varilla’s abdomen after getting outbalanced during a shot attempt before he was decked with an elbow to the head by Erram.

As players from both teams rushed to get in between the scuffle, Standhardinger also got hit with an elbow by Varilla.

The Batang Pier benefited from the calls, mounting an 11-0 run to secure the win and force a do-or-die match on Wednesday, November 27, at the same venue.

Standhardinger finished with 24 points, 13 rebounds, and 3 steals, while Sean Anthony added 12 points, 4 rebounds, and 2 blocks for NorthPort, which seeks a second semifinals appearance in franchise history.

Quiñahan churned out 20 points to pace NLEX, which lost its third straight game and is on the brink of seeing its stellar start go to waste.

While Qualls dominated, the same could not be said for Road Warriors import Manny Harris, who was limited to 12 points on 5-of-18 shooting on top of 7 rebounds, 4 assists, and 2 steals.