Nov 26, 2019 8:57 AM PHT
Delfin Dioquino
Facebook Twitter Copy URL
Copied
Romeo Travis could not wrap his head around the fact that Magnolia squandered another huge double-digit lead as it crashed out of the Governors' Cup playoffs 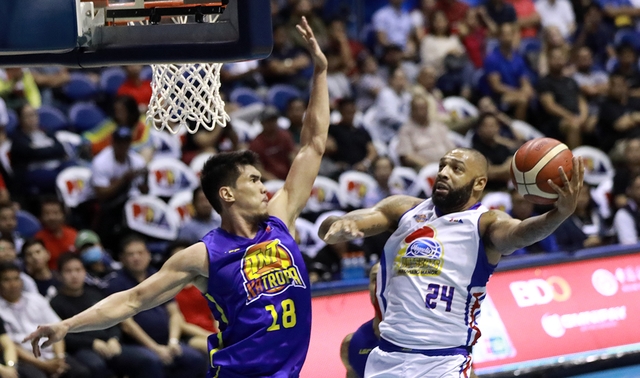 MANILA, Philippines – Import Romeo Travis was left puzzled by how Magnolia managed to waste a huge double-digit lead as it saw its title-retention hopes in the PBA Governors’ Cup dashed by TNT.

The Hotshots squandered an 18-point cushion and absorbed a heart-wrenching 97-98 loss to the twice-to-beat KaTropa on Wednesday, November 25, ending their campaign with an early quarterfinals exit.

“It’s been ongoing all year – we get a big lead and mysteriously, it disappears. I don’t know how it happens but it always seems to happen to us very frequently,” an upset Travis told reporters after.

Travis’ frustrations are warranted, especially since it was the fourth time in the season-ending conference that they lost despite holding a double-digit lead.

If the Hotshots won at least one of those games, they might have made a case for a twice-to-beat quarterfinal incentive and avoided their cruel fate instead of finishing at No. 6 with a 6-5 record.

“Of course it’s frustrating. I go out there and play my heart out? And the same things keep, continue happening to me? Frustrating is me not being able to curse right now,” he said when asked how he feels.

Travis laid it all on the floor in an attempt to forge a sudden death match after churning out 32 points, 26 rebounds, 4 blocks, and 2 steals.

But the Hotshots committed 7 of their 16 turnovers in the last frame alone, contributing to the 32-point fourth-quarter outburst the KaTropa used to complete the comeback and clinch their semifinals berth.

Also, Travis missed a crucial free throw in the final 15 seconds which would have put Magnolia up 98-96 before Ray Parks canned two pressure-packed foul shots that put TNT ahead for good.

Travis, however, said it should not have reached to the point where their chance of winning was decided by a foul shot.

As he licks his wounds from the painful defeat, Travis would rather not discuss a potential PBA return with Magnolia.

“I don’t even want to talk about no next year right now. My mind is very frustrated right now. I can’t even think about tomorrow, let alone next year,” he said.

“The injury, just being in this situation where we keep giving up the games in the same kind of the way? It’s very hard for me to continue to play like this,” Travis added. “I don’t know. I’m getting old.”

Travis, who helped the Hotshots end a four-year PBA title drought with the Governors’ Cup title last season, said the team should make the first move.

“It’s up to them. They have to call me. I just can’t say I’m coming back. I can’t offer myself a contract,” Travis said.

After a gruelling conference, Travis looks forward to returning to the United States and spending time with his family.

“I’m going home and I’m being a dad, taking my kids to school. I can’t wait to just be able to be along with my kids, and my wife, and just [be] a stay-at-home dad. It’s going to be nice.” – Rappler.com