No. 8 NorthPort stuns No. 1 NLEX in 3OT to reach semis 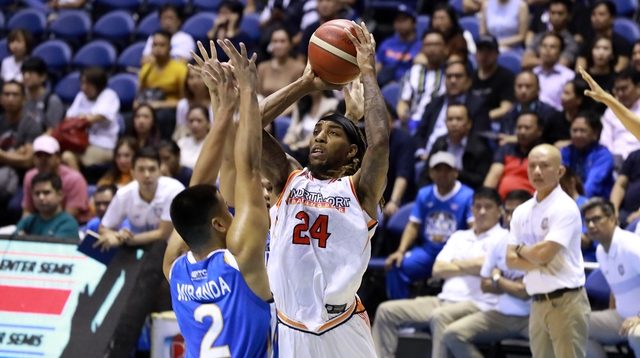 Facebook Twitter Copy URL
Copied
Christian Standhardinger, Michael Qualls, and Sean Anthony star as NorthPort becomes only the fourth team in PBA history to take down the No. 1 team

MANILA, Philippines – NorthPort pulled off the biggest upset in the PBA Governors’ Cup with an enthralling 126-123 triple overtime win over NLEX to barge into the semifinals at the Araneta Coliseum on Wednesday, November 28.

Christian Standhardinger, Michael Qualls, and Sean Anthony starred for the No. 8 Batang Pier, who overcame the Road Warriors’ twice-to-beat advantage to become only the fourth team in PBA history to take down the No. 1 team.

Standhardinger had 33 points, 23 rebounds, 7 assists, and 2 steals in 61 minutes as NorthPort reached the semifinas for only the second time in franchise history by erasing a 16-point lead before holding on in the extra periods.

He also drained the free throws in the last 1.8 seconds that gave the Batang Pier a three-point cushion as Kiefer Ravena failed to send the match into a fourth overtime after missing his last-gasp three-pointer.

Qualls delivered 31 points, 21 rebounds, 5 blocks, and 4 assists in nearly 62 minutes, while Anthony came off the bench and churned out 30 points, 11 rebounds, and 2 steals in 47 minutes of action.

Incidentally, Powerade – which franchise was taken over by NorthPort – was the last No. 8 squad to beat the No. 1 team, eliminating B-Meg in the 2012 Philippine Cup before settling for silver to TNT in the finals.

Anthony, a member of that Powerade team, laid it all on the floor to repeat the feat as he scored 24 points in the 4th and overtime periods, including the layup that put the Batang Pier up 124-123 with 13 seconds left.

The Road Warriors found Jericho Cruz open from beyond the arc in the ensuing play, but his three-pointer fell way short – a miss that set up the Standhardinger foul shots that essentially sealed the deal.

Nico Elorde recorded 12 points, 9 rebounds, 5 assists for NorthPort – which will face Barangay Ginebra in a best-of-five semifinals duel – in the win that marked only the 13th triple overtime game in PBA history.

Manny Harris was in his bag with 43 points, 16 rebounds, 5 assists, and 4 steals, but he was kept scoreless in the last two extra periods as NLEX ended its campaign on a four-game losing streak.

The Road Warriors zoomed into an 8-1 start only to flounder in their last 4 games, losing thrice to the Batang Pier.