Nov 27, 2019 10:59 PM PHT
Bonz Magsambol
Facebook Twitter Copy URL
Copied
'Attempting to dictate how the media should report the news has no place in a democracy,' the National Union of Journalists of the Philippines says 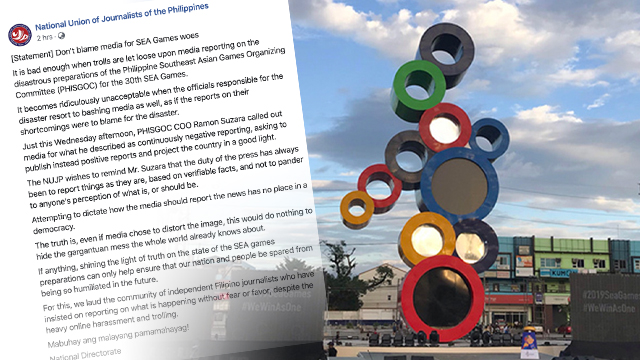 MANILA, Philippines – The National Union of Journalists of the Philippines (NUJP) slammed attacks against journalists over their coverage of the 30th Southeast Asian Games.

In a statement released Wednesday night, November 27, the NUJP said “attempting to dictate how the media should report the news has no place in a democracy.”

“It becomes ridiculously unacceptable when the officials responsible for the disaster resort to bashing media as well, as if the reports on their shortcomings were to blame for the disaster,” the NUJP said.

The NUJP statement came after the Philippine Southeast Asian Games Organizing Committee (PHISGOC) chief operating officer Ramon Suzara called out the media for its “continuously negative reporting” of the event. Suzara then requested the media to publish positive reports and project the country in a good light.

The NUJP reminded Suzara that role of the media has always been to report based on verifiable facts and “not to pander to anyone’s perception of what is, or should be.”

“If anything, shining the light of truth on the state of the SEA games preparations can only help ensure that our nation and people be spared from being so humiliated in the future,” the NUJP said.

Days before the opening ceremonies on Saturday, November 30, SEA Games hosting of the Philippines made headlines following the backlash over logistical blunders, insufficient food for delegates, and workers racing to finish the construction of venues so close to the event.

While most Filipinos online were embarrassed by the SEA Games fiasco, others took a swipe at the Philippine media for reporting the lack of preparedness of the government for the event. (READ: #SEAGamesFail: Netizens embarrassed by Philippines’ SEA Games hosting)

President Rodrigo Duterte expressed disappointment over the mishaps and wanted a probe into why these things happened. (READ: Duterte ‘displeased’ by SEA Games mishaps, wants probe)

Meanwhile, for Senate President Tito Sotto, the Philippines is actually “too hospitable” as host, unlike some previous host countries which reportedly left visiting teams to “fend” for themselves.

“Why do you think the host country always wins? The host country is not supposed to feed them etc etc etc. We spent for our meals and other expenses even lodging,” Sotto said.

The NUJP commended Filipino journalists for their truthful reporting despite the attacks.

“We laud the community of independent Filipino journalists who have insisted on reporting on what is happening without fear or favor, despite the heavy online harassment and trolling,” the NUJP said. – Rappler.com