Nov 30, 2019 11:03 PM PHT
Agence France-Presse
Facebook Twitter Copy URL
Copied
In a spectacle filled with Philippine tradition and stardom, the nation welcomes thousands of competitors from around the region for 11 days of games 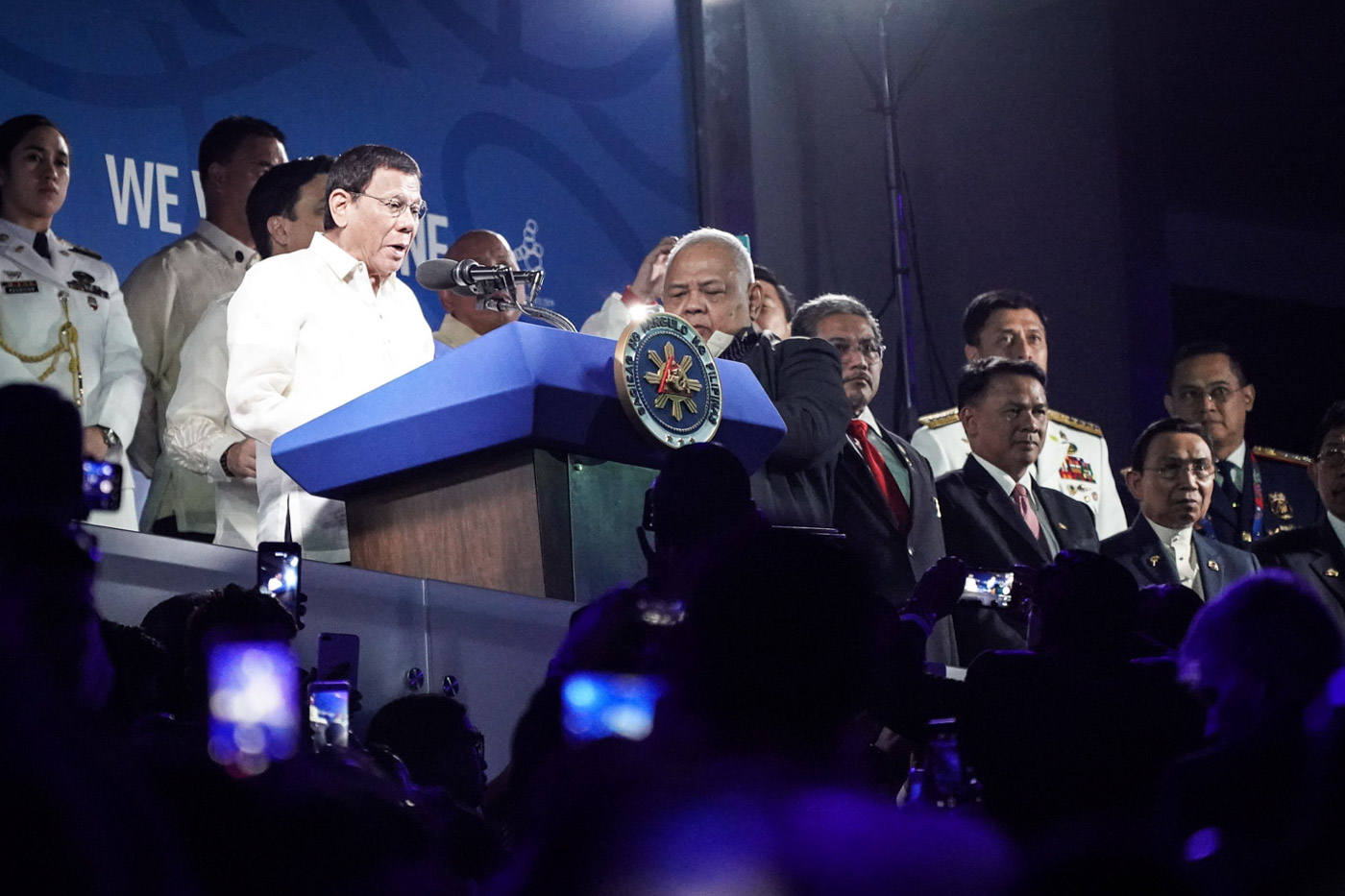 MANILA, Philippines – President Rodrigo Duterte and boxing icon Manny Pacquiao threw open the doors to the 2019 Southeast Asian Games in the Philippines on Saturday, November 30,  as a powerful typhoon took aim at the nation’s north and the competition’s core venues.

In a spectacle filled with Philippine tradition and stardom, the nation welcomed thousands of competitors from around the region for 11 days of games that got off to a rough start due to transport snafus and a last-minute rush to wrap up construction.

(IN PHOTOS: Performances at the SEA Games 2019 opening ceremonies)

As the Games opened Typhoon Tisoy (Kammuri) was rumbling in off the Pacific, with forecasters expecting it to hit early next week packing heavy rain and strong winds. The Philippine Atmospheric, Geophysical, and Astronomical Services Administration (PAGASA) said Tisoy was forecast to carry gusts of 185 kilometers (115 miles) per hour and maximum sustained winds of 150 kph (93 mph).

Despite the threat, the SEA Games opening ceremony at the Philippine Arena in Bocaue, Bulacan was a festival of dance, music and sport – even Duterte was shaking his hips.

“I declare open the SEA Games for the 30th time, celebrating the games of Southeast Asia,” the president said in English, before welcoming visitors in Filipino.

Boxer-turned-politician Pacquiao – one of the greatest ever fighters – appeared right at the end of the 100-minute show to ignite the Games cauldron in New Clark City in Capas, Tarlac. (WATCH: Pacquiao, Petecio set SEA Games 2019 cauldron aglow)

The ceremony at the indoor Philippine Arena, 25 kilometres (15 miles) north of the capital Manila, kicked off with a medley of vibrant routines set to traditional folk music, with dozens of performers dancing or wielding machetes, daggers and sticks.

Athletes and delegates from the 11 competing nations then paraded around the 55,000-seat venue in traditional Philippine pageant style, with many waving national flags and taking selfies.

The loudest cheer of the night came when Duterte – sat alongside Sultan of Brunei Hassanal Bolkiah – was seen dancing and clapping along to the Philippine team’s parade music, “Manila” by Hotdog.

There were musical performances from apl.de.ap, the Filipino-American rapper best known for being in the hip-hop group The Black Eyed Peas, local crooner Robert Seña and the Philippines national anthem was sung by Lani Misalucha, known as “Asia’s Nightingale”.

This year’s SEA Games in Clark, Manila and Subic, which run through to December 11, are particularly complex with a record 56 sports across dozens of venues that are in some cases hours apart by car, even before Manila’s notorious gridlock traffic is factored in.

Thousands of athletes have flooded into the Philippines for the multi-sport event, and an embarrassing string of gaffes led to Duterte calling for a probe into the chaotic organization which even sparked the hashtag #SeaGamesFail.

“I’m really apologizing for the country… they (other nations) should know while they are still here that the government is not happy,” Duterte said in an interview that aired Friday.

“You cannot just cast away all those – the discomfort, the sufferings of the athletes, sleeping on the floors, getting hungry,” he added. “To the countries that sent them here, it’s a big deal.”

He also instructed organisers to release complimentary tickets to many of the 56 sports at the SEA Games to locals. – Rappler.com