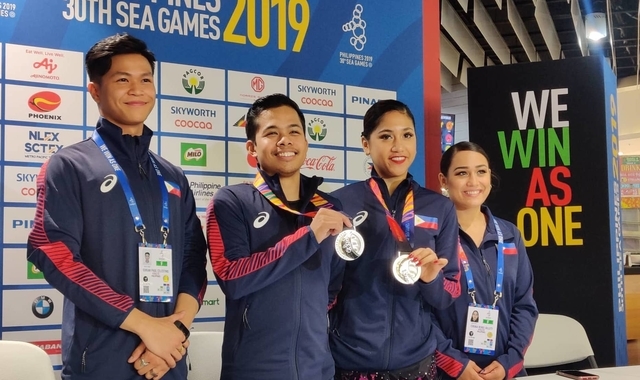 MANILA, Philippines – Alisson Krystle Perticheto and Christopher Caluza added to the Philippines’ medal haul in the 2019 Southeast Asian Games with a pair of silver in ice skating on Sunday, December 1.

The two dazzled in front of a sizeable crowd at the SM Megamall in Mandaluyong with Perticheto earning 132.76 points and Caluza garnering 180.22 points for back-to-back second-place finishes.

Perticheto ruled the short program with 53.65 points last week but settled for silver after a top-tier performance by Singapore’s Chloe Ing, the runaway winner with 152.67 points.

Despite falling short of the top prize, Perticheto outdid her bronze-medal finish in the 2017 edition in Kuala Lumpur, Malaysia.

“I’m very proud. This silver medal is not for me, it’s for my country,” Perticheto told reporters.

“You know, to be able to get a silver from bronze two years ago, I’m very proud and happy, and my next goal is to get the gold two years later.”

Meanwhile, Caluza held the lead after tallying 180.22 points following his skate before eventual gold medalist Julian Yee of Malaysia – the last to perform – impressed the judges en route to 202.62 points.

Caluza replicated the silver-medal triumph of skating star Michael Martinez in 2017. The country’s lone skating Olympian, though, was conspicuously absent after begging off from SEA Games action.

“I’m happy regardless of any medal or any kind of thing because I worked so hard to be here and that’s the most important part,” Caluza said.