Dec 2, 2019 4:33 PM PHT
Delfin Dioquino
Facebook Twitter Copy URL
Copied
The win turns out to be a revenge of sorts for the Philippines, which absorbed its only loss in the 2019 SEA Games at the hands of Thailand 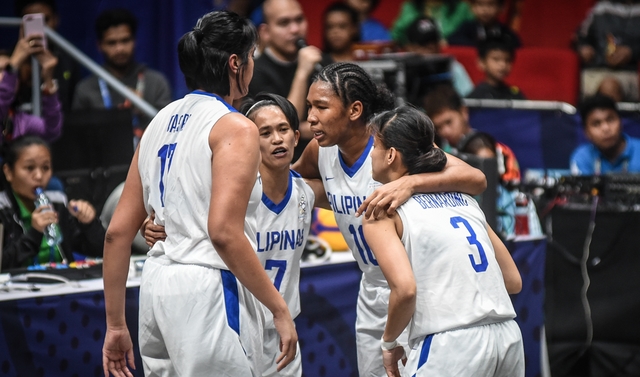 Afril Bernardino delivered 10 points as she almost singlehandedly towed the Philippines to an exhilirating 17-13 win before an appreciative crowd at the Filoil Flying V Centre in San Juan on Monday, December 2.

Despite suffering a sprained thumb, Bernardino laid it all on the floor, giving Gilas Pilipinas Women a comfortable 16-6 lead using her sheer speed and wit to deceive her defender on successful drive attempts.

“I couldn’t fathom how great of a game she played,” Philippines head coach Pat Aquino said of Bernardino in a mix of Filipino and English.

Thailand, though, never wavered and mounted a last-ditch comeback after narrowing the gap to 13-17 behind a 7-1 run.

But with time expiring, the Philippines held on to the win that seemed like a revenge of sorts after its only loss of the tournament came at the hands of Thailand.

Thunderous applause and roaring screams from fans in the venue followed as the Filipinas held back tears upon realizing the historic feat they accomplished, with 3×3 basketball debuting in the SEA Games.

“I can only hope that women’s basketball will become more popular after what we did. We’ll continue to get better,” said Janine Pontejos, who chipped in 3 points in the finals victory, in Filipino.