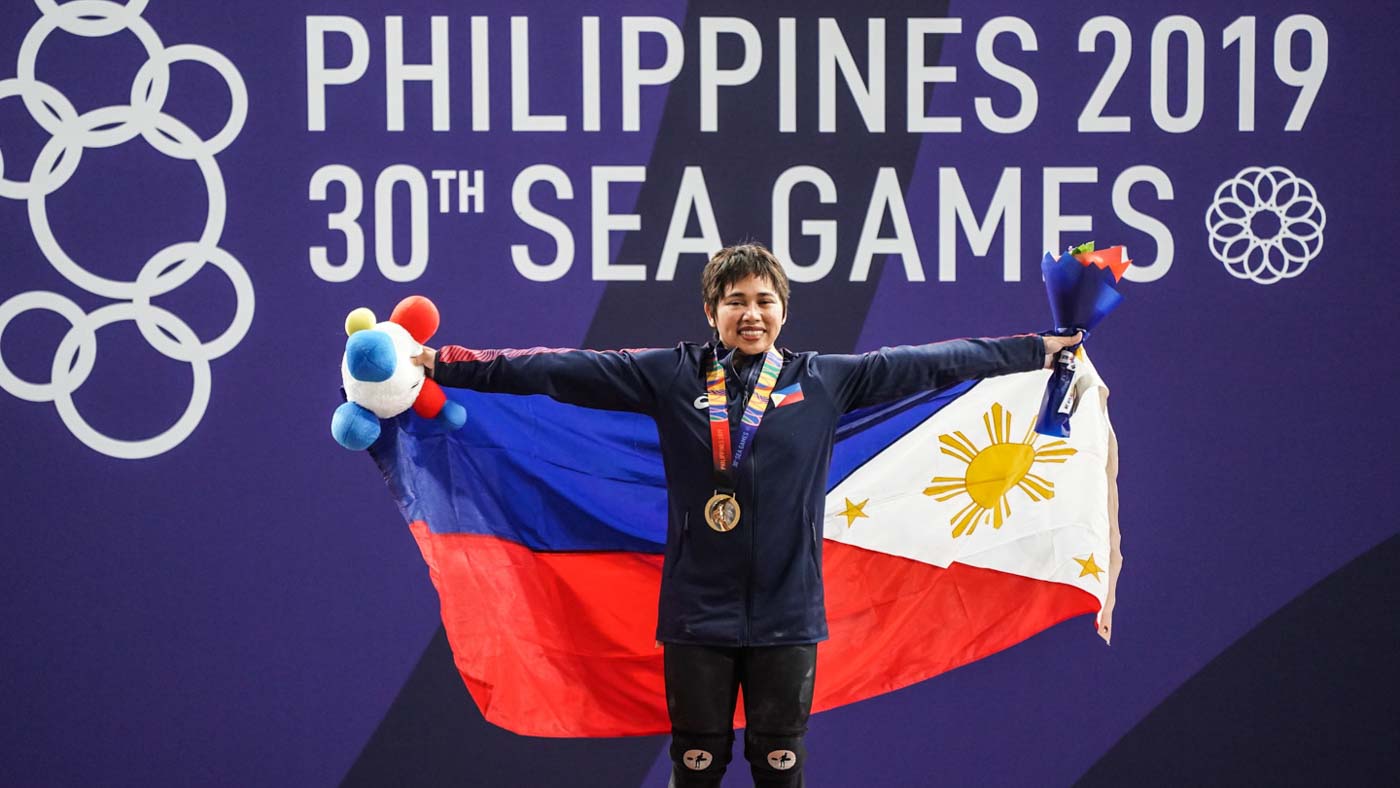 Diaz, 28, a silver medalist in the 2016 Rio De Janeiro Olympics, lifted a total of 211kg in topping the women’s 55kg division before an animated crowd at the newly renovated Rizal Memorial Coliseum.

Diaz added the breakthrough SEA Games gold to her glowing collection of medals that also includes a gold in the Asian Games and a bronze in the world championships.

Arnis also shared the limelight as it churned out 7 more gold medals to keep the Filipinos on top of the medal standings.

Team Philippines improved its two-day gold medal tally to 38 on top of 20 silver and 13 bronze medals and continued to pull away from closest pursuers Vietnam (15-20-16) and Malaysia (10-2-7).

Basketball and mountain bike made Monday more special after completing a sweep of the 3×3 and downhill events, respectively, while pencak silat, duathlon, and triathlon also added a gold each.

In basketball, the quartet of CJ Perez, Mo Tautuaa, Chris Newsome, and Jason Perkins sparked Gilas Pilipinas to the inaugural men’s 3×3 gold by whipping Indonesia in the finals, 21-9, capping its unbeaten campaign.

The women’s side of Afril Bernadino, Jack Animam, Janine Pontejos, and Clare Castro got back at elimination round tormentor Thailand to win the gold, 17-13.

Cyclists John Derick Farr and Lea Denise Belgira scored a twin kill in the mountain bike downhill that set the tone earlier for another gold rush for the Filipinos.

Triathlon contributed its third gold medal as Kim Mangrobang and Claire Adorna teamed up with Fernando Casares and John Chicano to rule the mixed team relay at the Subic Bay boardwalk.

It was the second gold for both Mangrobang and Chicano, who ruled the men and women’s individual races, respectively, on Sunday, December 1.

There were silver medals along the way, too.

Joey delos Reyes started the Monday’s events with a silver in the men’s duathlon competition in Subic.

Billy Joel Valenzuela emerged a win short in the men’s padded stick lightweight division in the arnis tournament, Celedonio Tayao settled for a runner-up finish in the benchcrest air rifle as shooting competitions got underway at the Marine Corps Center, and so did Eleazar Barba who finished 2nd in the men’s mountain bike downhill race. – Rappler.com