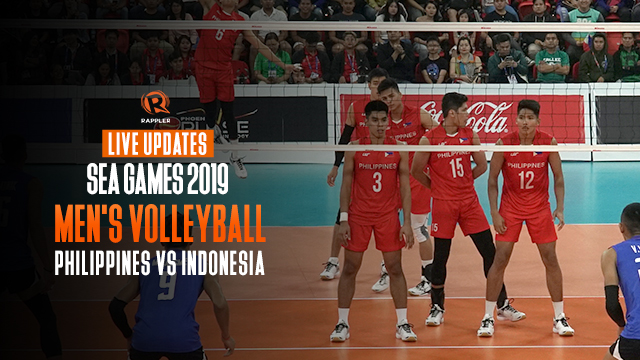 MANILA, Philippines – After a strong two-game start to their 2019 Southeast Asian Games campaign, the Philippine men’s volleyball team is now on the cusp of clinching the top spot in Pool B as it takes on Indonesia on Friday, December 6.

Led by the star power of Marck Espejo and Bryan Bagunas, the national team has yet to drop a set after sweeping Cambodia and more surprisingly, mainstay semifinalist Vietnam.

Young gun Joshua Retamar also proved his first game was no fluke as he again directed the show against the Vietnamese with his pinpoint sets and timely blocks.

However, the Philippines’ dominant run will now be put to the ultimate test as it faces an Indonesian side that also hasn’t dropped a set in its 2-0 start.

Will the team continue to make a case as the best Philippine men’s volleyball team assembled in a decade or will Indonesia put a roadblock on its quest for gold?

Game time is at 6 pm at the PhilSports Arena in Pasig City. Follow Rappler’s live updates below: