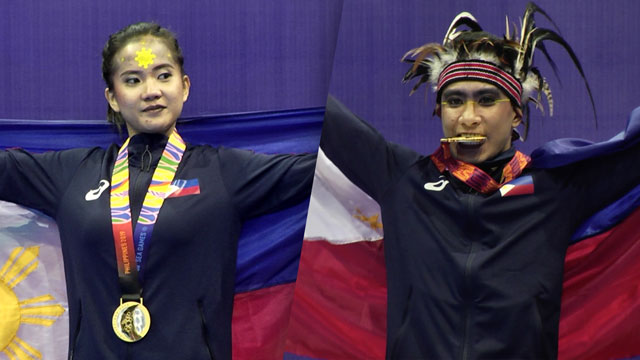 The country added two more golds thanks to Crisamuel Delfin and Mary Allin Aldeguer as they swept the anyo open weapon non-traditional events on Tuesday.

In the women’s side, Aldeguer, who admitted that it was a challenge for her to win the gold, beat Vietnam’s Thi Hoai Trieu for the top spot while Myanmar’s Naing L Sheilar Min and Cambodia’s Soumala Eng copped a twin bronze finish.

(I became so emotional because usually in a new competition, I don’t really win the gold immediatley. But I told myself this time, it’s my first time in the SEA Games, I’ll do my best for my family, for the country and for those who have supported me.)

The Philippines had aimed to close out its campaign on a high note but traditional anyo performers Mark David Puzon and Ryssa Jezzel Sanchez fell short of the gold.

Puzon lost the top spot to Vietnam’s Duc Tri Do, while Sanchez suffered a heartbreak to Myanmar’s Foo Eian Dray.

Despite failing to sweep all of Tuesday’s events, Philippine arnis remains as the contingent’s most bemedalled team as it wrapped up its campaign with 14 golds, 6 silvers and 2 bronzes for a total of 22 medals. (MEDAL TALLY: Philippine team at SEA Games 2019) – Rappler.com