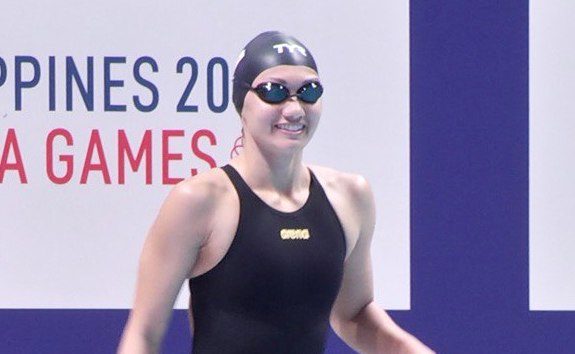 CAPAS, Philippines – Philippine swimming got its campaign off to a positive start as 3 tankers smashed their national records – highlighted by James Deiparine’s golden performance – in the 2019 Southeast Asian Games on Wednesday, December 4 at the New Clark City Aquatics Center.

Deiparine brought home the gold that had eluded the country for 10 years as he clocked 1 minute and 1.46 seconds in the 100-meter breaststroke to shatter the record set by Vietnam’s Nguyen Huu Viet (1:01.60) in the Games’ 2009 edition.

He also eclipsed his own national mark of 1:02.00, which he recorded during his silver-medal run in the 2017 Kuala Lumpur SEA Games.

Despite losing to defending champion Quah Jing Wen of Singapore by a hair, Remedy Rule still made her SEA Games debut worthwhile by setting another national record in the women’s 200m butterfly with a time of 2:10.99.

She reset her previous mark of 2:11.38 minutes clocked last July in the world swimming championships in Gwangju, South Korea, which was faster than Quah’s gold-medal time of 2:12.03 in the 2017 SEA Games.

Veteran Jasmine Alkhadi still proved that she can break barriers as she clocked 55.76 seconds in the women’s 100m freestyle that merited her a bronze medal behind Singaporeans Quah Ting Wen (54.74s) and Cherlyn Yeoh (55.55s), who pulled off a 1-2 finish.

The 26-year-old Alkhaldi last broke the national record in the 2017 SEA Games where she clocked 55.90s.