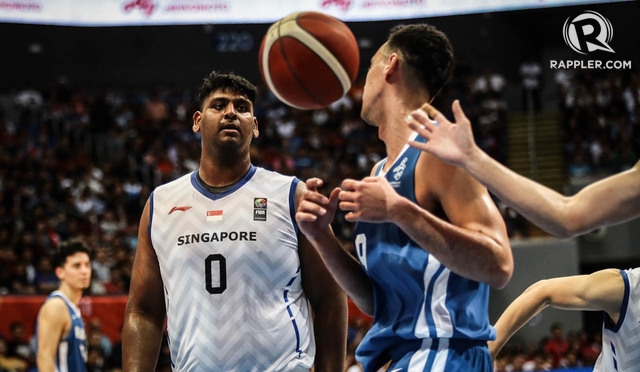 MANILA, Philippines – Is it because of his unassuming demeanor? Or his striking physique uncommon for a professional basketball player?

That is up for debate, but Singapore’s Lavin Raj sure has achieved instant fame in the 2019 Southeast Asian Games.

Raj found himself on the receiving end of thunderous cheers and applause from the sizeable crowd at the Mall of Asia Arena as Singapore tangled with Gilas Pilipinas on Wednesday, December 4.

Each time the 6-foot-7 teen held the ball, the crowd egged him on to score against the Philippines’ big men, the uproar getting louder every after possession.

“They’re very loud, you know? I’m honored to be here, to embrace the crowd, and play a game here,” he told reporters.

“When I go overseas to play, even when Alab Pilipinas, they come over to Singapore to play, the Filipino crowd is there,” added Raj, who plays for the Singapore Slingers in the ASEAN Basketball League.

“They’re everywhere. They’re really a great, passionate people. They really have a good passion for basketball.”

Gilas Pilipinas coach Tim Cone explained Filipino fans just function that way – “they’ll either applaud him or give him a hard time.”

“Our crowds always take a personality of their own. The collective yelling and screaming when their big guy got the ball was typical of the personality of our crowds was,” Cone told reporters.

“I was joking on the bench that he’s going to show up on a commercial tomorrow on TV ’cause he got so popular in one day.”

But despite the opposing crowd rooting for him, Raj struggled against the likes of June Mar Fajardo and Greg Slaughter.

Still, the warm Filipino reception was not lost on Raj.

“It’s a game of basketball, you know? The crowd can cheer for both sides. I’m really happy they liked the way I played a game, you know, and they are cheering for me. It’s great. I’m happy.”

With the Philippines sending an all-PBA team for the first time in SEA Games history, the 19-year-old capitalized on the opportunity to learn.

“They are PBA players. It’s a good experience for me to play against them and you know, improve my game slowly,” he said. – Rappler.com