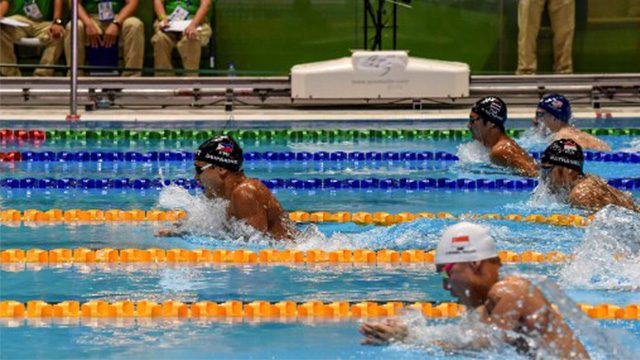 Facebook Twitter Copy URL
Copied
'I could really hear the crowd really, really loud. I knew that I was out fast,' Fil-Am swimmer James Deiparine says of his 2019 SEA Games golden performance

CAPAS, Tarlac – In his first major swim in the Philippines, Filipino-American swimmer James Deiparine finally experienced what a homecourt advantage feels like.

Deiparine said he was able to sustain his momentum down the stretch of the men’s 100m breaststroke event thanks to the cheers of the Filipino crowd.

Ultimately, it was at that point that he knew that he could win the Philippines’ first Southeast Asian Games gold for the first time in 10 years.

“I wasn’t really looking around, but I could just hear the crowd screaming and that really helped me a lot in the race and I just really appreciate all the support from the Philippines,” said Deiparine, who clocked 1 minute and 1.46 seconds to break both the national and the SEA Games records.

“I could really hear the crowd really, really loud. I knew that I was out fast.”

Vietnam’s Thanh Bae Pham clocked at 1:01.92 for the silver, while Singapore’s Chien Yin Lionel Khoo missed the runner-up finish by a hair with a time of 1:01.98.

Before the country’s hosting of the regional biennial meet, Deiparine bagged a couple of silver medals in the 50m and 100m breastroke events in the Kuala Lumpur edition where he made his SEA Games debut.

As his first gold medal boosted his confidence, the 26-year-old tanker hopes to conquer the men’s 50m breaststroke on Sunday, December 8, as well. – Rappler.com