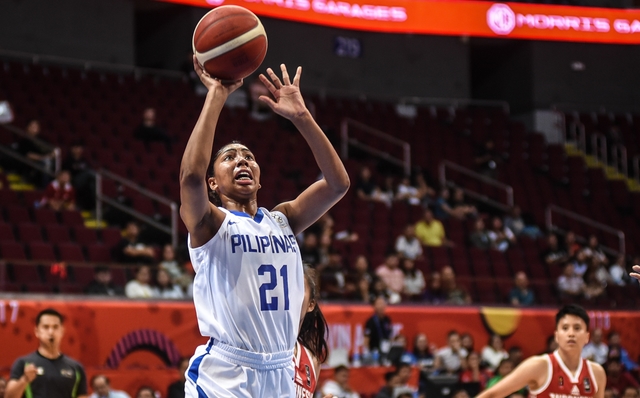 MANILA, Philippines – Gilas Pilipinas Women opened their quest for a historic gold medal in the 2019 Southeast Asian Games with a gritty 63-56 win over Indonesia at the Mall of Asia Arena on Thursday, December 5.

Janine Pontejos came through at crunchtime as the Philippines recovered from a seven-point deficit to exact revenge on Indonesia, which triumphed in their duel in the 2017 edition en route to nailing bronze.

Pontejos had 16 points to go with 5 steals and 3 assists, knocking down all of her 4 free throws in the final 40 seconds to provide the hosts enough separation.

Kelli Hayes put up 12 points to backstop Pontejos in scoring, while Jack Animam finished with 9 points, including the layup that gave them their biggest lead at 59-51.

Indonesia managed to shave its deficit to 56-61 off a Henny Sutjiono triple, but time was not on its side as Pontejos iced her insurance free throws.

Although their numbers did not pop out of the score sheet, Danica Jose, Ria Nabalan, and Ana Castillo all made timely baskets in a 14-5 run that swung a 33-40 deficit to a 47-45 lead for the Philippines.

Castillo hit a three-pointer to put Gilas Women within a single possession, 41-43, before Jose and Nabalan sank a layup and a triple, respectively, as they took the front seat for good.

Gilas Pilipinas Women will face Malaysia next on Sunday, December 8, at the same venue. – Rappler.com