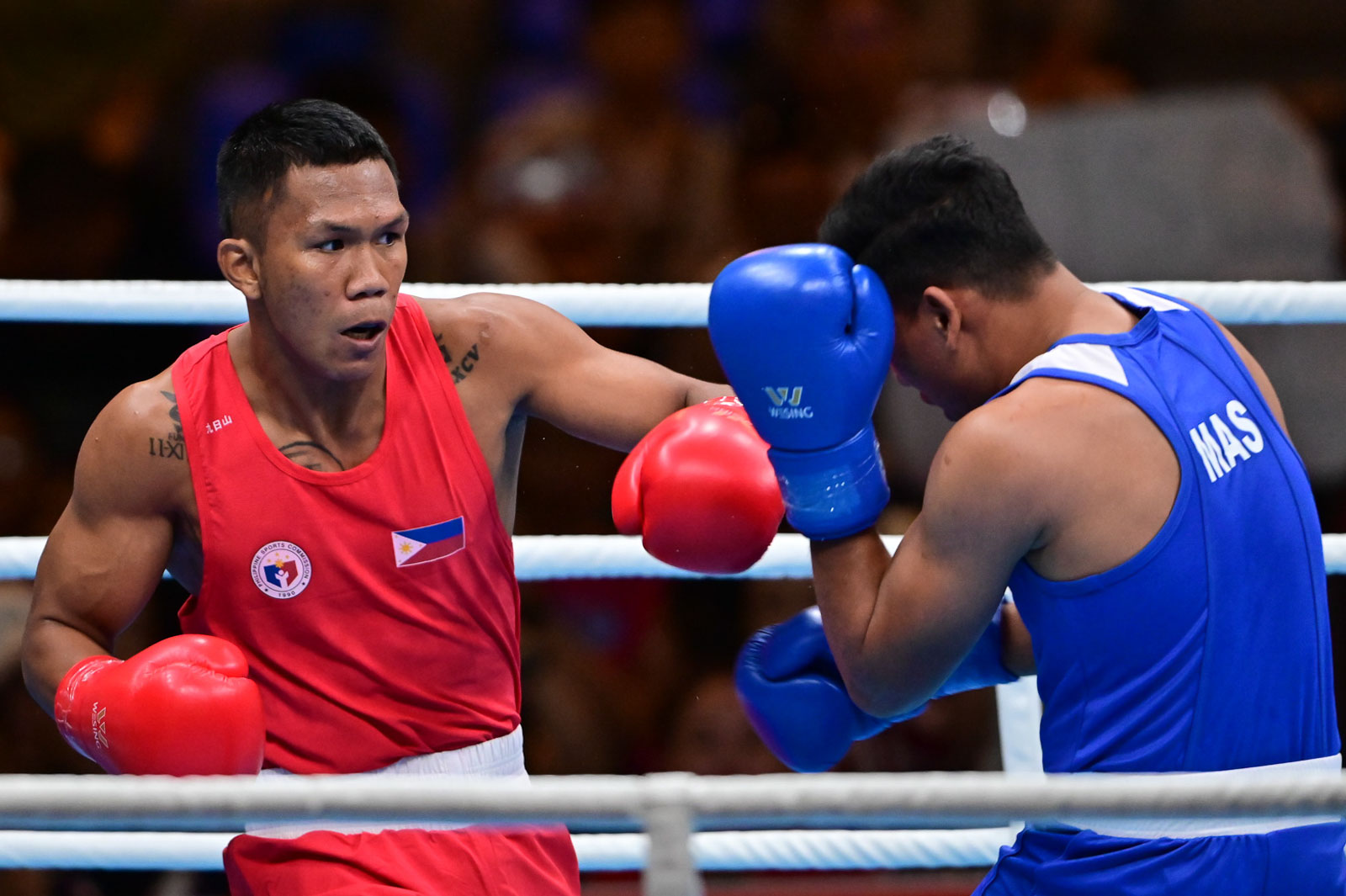 MANILA, Philippines – Filipino pugilist Eumir Marcial sent the raucous crowd inside the Philippine International Convention Center into a frenzy, notching a rousing knockout victory in his maiden outing at the 2019 Southeast Asian Games on Friday, December 6.

Once the bell rang, the 24-year-old Zamboanga City native transformed into a non-stop punching machine, punishing the Malaysian with a torrent of harrowing blows that forced the referee to call for a standing eight-count twice in round 1.

Sensing that the Malaysian could not handle the pressure he was imposing, Marcial bombarded him with more solid shots, compelling the referee to step in and call a halt to the contest.

In other bouts of the evening, four-time SEA Games gold medalist Josie Gabuco needed to survive 3 grueling rounds with Vietnam’s Thi Diem Kieu to walk away with a favorable result in their women’s light flyweight semifinal showdown.

Gabuco regained some steam in the succeeding rounds as she began to get her groove, operating behind her left uppercuts to the midsection and a series of crisp left hooks to the head.

As Thi Diem Kieu rabidly swung for the fences in a desperate attempt to disrupt the Filipina’s rhythm, Gabuco kept her composure and fluidly landed her counterpunches en route to a hard-earned unanimous decision and a spot in the women’s light flyweight final.

Meanwhile, Carlo Paalam smoothly earned his ticket to the light flyweight final by outclassing Malaysia’s Muhamad Fuad Mohd Redzuan over the course of 3 rounds to win by unanimous decision.

Knowing he was one step away from booking a bout for the gold, Paalam was relentless in his assault, eventually scoring a standing eight-count at the expense of his Malaysian foe in the 1st round.

Redzuan retaliated by fighting fire with fire, but Paalam stood his ground and hammered the more telling blows in the next two frames of the contest. In the end, all 5 judges had it in favor of the 21-year-old Pinoy boxer.

Two gold medals are within female lightweight Riza Pasuit and welterweight Marjon Piañar’s reach as they both drew semifinal byes to reach the championship stage of their respective divisions.

However, the Philippines did not start on a triumphant note on the third day of the competition as Aira Villegas yielded to Thailand’s Nilawan Techasuep in the semifinal of the women’s bantamweight bracket.

Villegas lost by way of three-round split decision, failing to advance to the gold-medal match. However, she will get to vie for bronze.

Both men figured in an intense war of attrition for 3 whole rounds as they had no qualms about trading their most powerful combinations in close quarters.

Though Bautista had his moments in the heated 56-kilogram match, it was Butdee who was awarded a close decision victory for his efforts. – Rappler.com