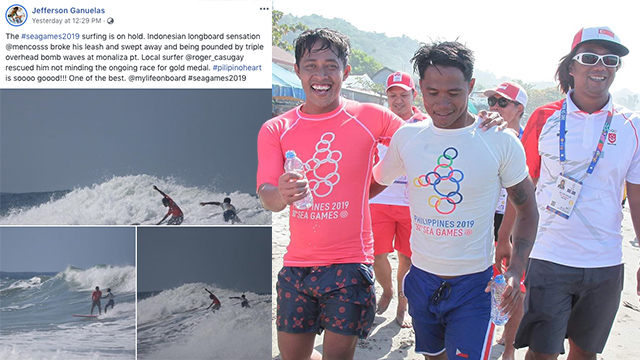 Messages of appreciation and gratitude poured on social media after a post about a Filipino surfer rescuing a competitor in the middle of a match in the 2019 Southeast Asian Games went viral.

According to a Facebook post by Jefferson Ganuelas, Filipino surfer Roger Casogay rescued his Indonesian rival Arip Nurhidayat, who got swept away and “pounded by triple overhead bomb waves” after his surfboard leash broke in the middle of the 3rd round of the surfing men’s longboard competition on Friday, December 6.

In the photos, both surfers are seen already riding a single board.

The Philippine Sports Commission also tweeted about the heroic act and commended 25-year-old Casogay for showing a “heart of a champion.”

– who broke his leash and got battered by the strong waves this afternoon in San Juan, La Union.

Despite missing out on that golden finish, he became the champion of many with the sacrifice a brother in the sport. He truly showed the heart of a champion. A Filipino Champion!

More social media users praised Casogay for his priceless act of heroism, transcending any medal in the competition.

Action in San Juan, La Union are still on hold due to unsuitable surfing conditions. The match between Casogay and Nurhidayat was postponed and rescheduled. – with a report from mau Victa/Rappler.com