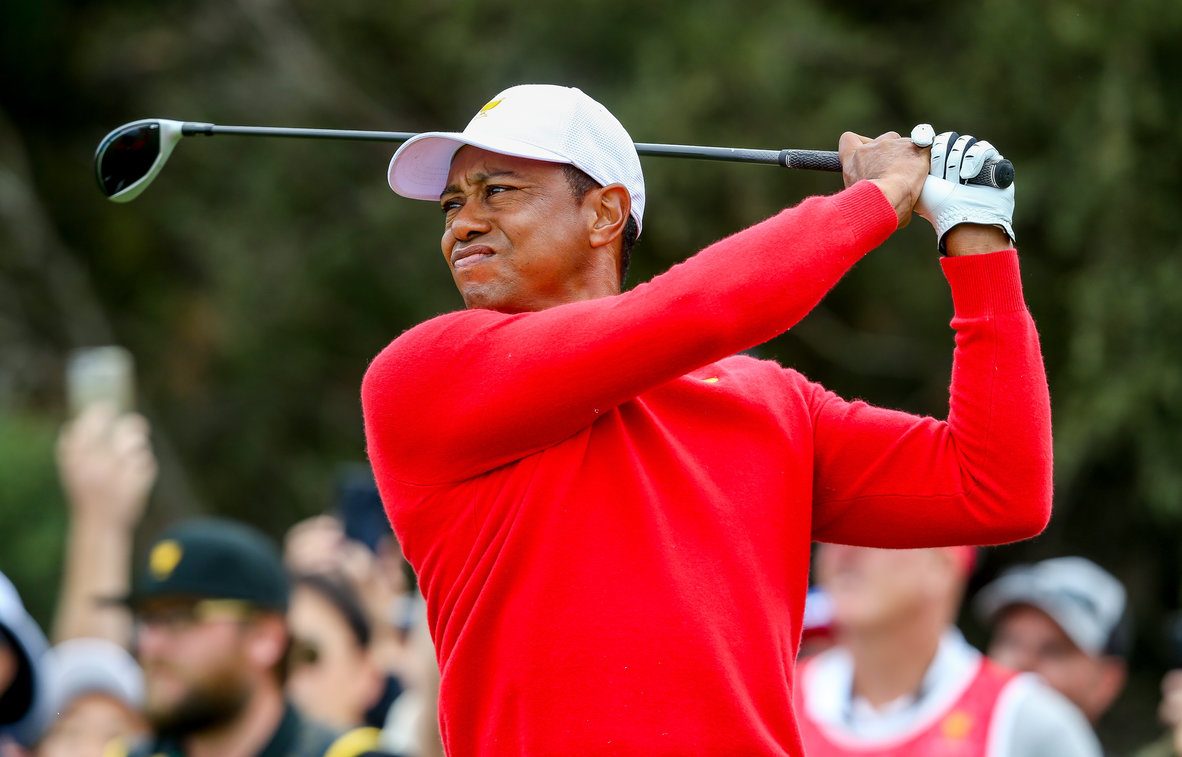 Facebook Twitter Copy URL
Copied
'I trusted all my 11 guys. I trusted them implicitly,' says playing-captain Tiger Woods as the US pulls off a stunning comeback against the Internationals

MELBOURNE, Australia – Tiger Woods’ United States produced a stunning turnaround to deny the Internationals a first Presidents Cup in 21 years Sunday, December 15, dominating the singles on a tense final day that went to the wire at Royal Melbourne.

Veteran Matt Kuchar was the hero, with his winning putt on the 17th in the penultimate match enough to ensure victory, sparking wild celebrations from playing-captain Woods, who set the tone by getting the first point on the board.

It was a crushing loss for Ernie Els’ young Internationals who led for the first 3 days of the biennial match play event but failed to deliver the killer blow against a more experienced and accomplished US team.

They went into the 12 singles matches with a 10-8 lead but the tide began quickly turning with Patrick Reed and Dustin Johnson among those racing to big early leads with the scoreboard swathed in US red.

When Webb Simpson beat South Korea’s An Byeong-hun, the US went 15-12 in front and needed just half a point with the Internationals leading in 2 of 3 matches still in play.

Australian Cameron Smith grabbed one more point by beating Justin Thomas, ensuring a nailbiting finale with Kuchar’s heroics on 17 ensuring there was no way back Els’ team.

“I trusted all my 11 guys. I trusted them implicitly. I told them from the very get go. They went out there and got the points we needed. We fought,” said Woods.

“Even the points we lost, we were making them earn every one of them, and this Cup wasn’t going to be given to us. We had to go earn it, and we did.”

It was a remarkable comeback. No side before had rallied to win on the last day after trailing for 3 days, further cementing the reputation of Woods, who went undefeated in his 3 matches.

“Congratulations to Tiger and the entire U.S. Team on a great comeback and tremendous WIN. True Champions!” he tweeted.

The playing-captain, in his ninth Presidents Cup, set the tone from the front, going out first in the singles and winning 3 and 2 against battling Mexican Abraham Ancer.

In doing so he passed Phil Mickelson to become the most successful Presidents Cup golfer in history with a 27 win, 15 loss and 1 tied record to his countryman’s 26-16-13.

It was the United States’ 11th victory in 13 editions of the event. One was drawn with the lone International win coming in 1998, also at Royal Melbourne.

Woods nailed a birdie on the second after a stunning approach shot to take an early lead and although Ancer fought back,  Woods’ putter was running hot and he was 2 up through 10.

The 15-time major winner was striding around Royal Melbourne on a mission and nailed a monster putt on the 16th for the 3 and 2 win.

At one stage the Americans were ahead in 9 matches, and world No. 5 Johnson ensured a second point, crushing Li Haotong 4 and 3.

It ended a difficult first Presidents Cup for a Chinese player who was overlooked for the opening two days and never looked at ease.

Patrick Reed’s caddie was banned after shoving a fan on Saturday as tensions boiled over after the controversial American’s penalty for improving his lie in the Bahamas last week.

The former Masters champion turned to his swing coach to carry his bag and it worked wonders as raced 6 up through 7 against Taiwan’s CT Pan in a scintillating display in front of taunting fans.

Pan woke up and won 3 in a row but it was in vain with the American winning 4 and 2.

The US were on a roll with Tony Finau earning a valuable half point against Japan’s Hideki Matsuyama, who looked to be on track for a win after going 4 clear through 10.

South Korea’s Im Sung-jae was a bright spot. Despite being just 21, the PGA Tour Rookie of the Year again showed his huge potential by comfortably beating US Open champion Gary Woodland. – Rappler.com