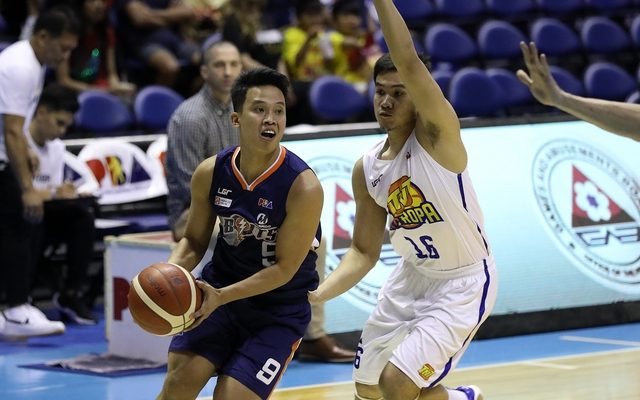 Facebook Twitter Copy URL
Copied
After keying Meralco to a semis-tying win over TNT, Baser Amer bares the marks left by Pogoy's pinching on different parts of his body

MANILA, Philippines – Baser Amer had a huge chip on his shoulder as he played a key role for Meralco in a 114-94 drubbing of TNT that tied their PBA Governors’ Cup semifinals at one game apiece.

Amer alleged Roger Pogoy has been pinching him since the start of the best-of-five duel, which left marks on different parts of his bodies.

“He pinched me on my stomach and on my legs,” Amer said in a mix of Filipino and English of Pogoy. “He pinched me several times last game. Hopefully the referees see him because that’s not basketball.”

“My coaches and my teammates told me, ‘It’s okay. Maybe in Game 2, he’ll pinch you again, just play well, don’t get affected.”

But the bad blood between both players seemed to have reached a boiling point when Amer, including some of his teammates and his coaches, engaged in a word war with Pogoy early in Game 2.

The commotion saw the KaTropa guard and Bolts deputy Chris Tan jawing at each other before they were both assessed a technical foul each.

“We’re motivated because it’s disrespectful since we’re not doing anything to them but they’re still bullying us,” Amer said.

The incident only set the stage for Amer, who churned out 20 points on 4 three-pointers to go with 3 rebounds and 1 steal, as he backstopped import Allen Durham, who had 44 points, 19 rebounds, and 11 assists.

It was a major upgrade from his Game 1 performance, where Amer was limited to 9 points and had no assists in 20 minutes of play.

Amer said his only focus is winning the series as Meralco seeks to return to the finals of the Governors’ Cup for the third time in the last 4 seasons.

“He can do it again in Game 3 or maybe Game 4 or Game 5, I’ll just play and focus on the game. I just want to win,” Amer said of Pogoy, who declined to comment on the issue.

Game 3 is on Thursday, December 19, at the Araneta Coliseum. – Rappler.com