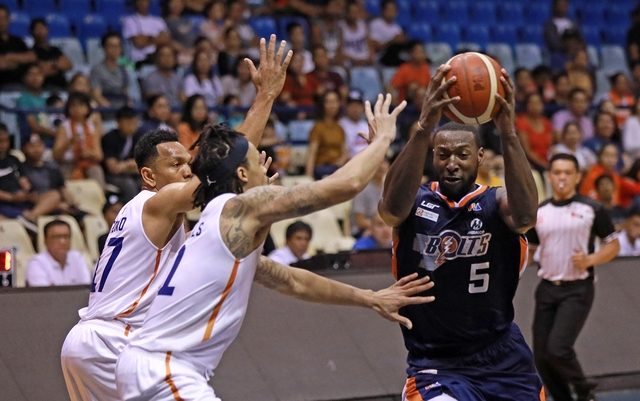 ANTIPOLO, Philippines – Meralco dragged TNT to a do-or-die match for the last finals berth in the 2019 PBA Governors’ Cup with a gritty 95-83 victory at the Ynares Center on Saturday, December 21.

Import Allen Durham did not want to go home just yet as he churned out monster numbers of 36 points, 13 rebounds, and 5 assists as the Bolts knotted the best-of-five semifinals series at two games apiece.

Seeking a third Governors’ Cup finals appearance in the last 4 seasons, Durham poured in 23 points in the last two periods, where Meralco preserved the lead it built in its second-quarter turnaround.

Baser Amer had 12 points, 7 assists, and 4 steals, Chris Newsome put up 10 points and 9 rebounds, while 3 other Bolts players scored at least 7 points.

The KaTropa were on track to wrapping up the series after leading by as much as 13 points, 17-4, and ending the maiden frame up by 6 points, 24-18.

However, Meralco outscored TNT in the ensuing quarter, 33-21, behind Durham and Allein Maliksi to enter the break with a 51-45 advantage.

Durham then combined for 19 fourth-quarter points with Amer as the two outscored the entire KaTropa, who never regained the upper hand after firing only 15 points in the final period.

“I’m proud of the way my players responded under pressure. We were in a do-or-die situation. Everybody was really attentive when it came to our adjustments to this game,” said Bolts coach Norman Black.

KJ McDaniels delivered 26 points, 9 rebounds, and 2 blocks for TNT, Troy Rosario had 15 points and 5 rebounds, while Jayson Castro chipped in 14 points, 7 assists, and 3 steals in the losing cause.

The knockout Game 5 will be staged on Monday, December 23, at the same venue.