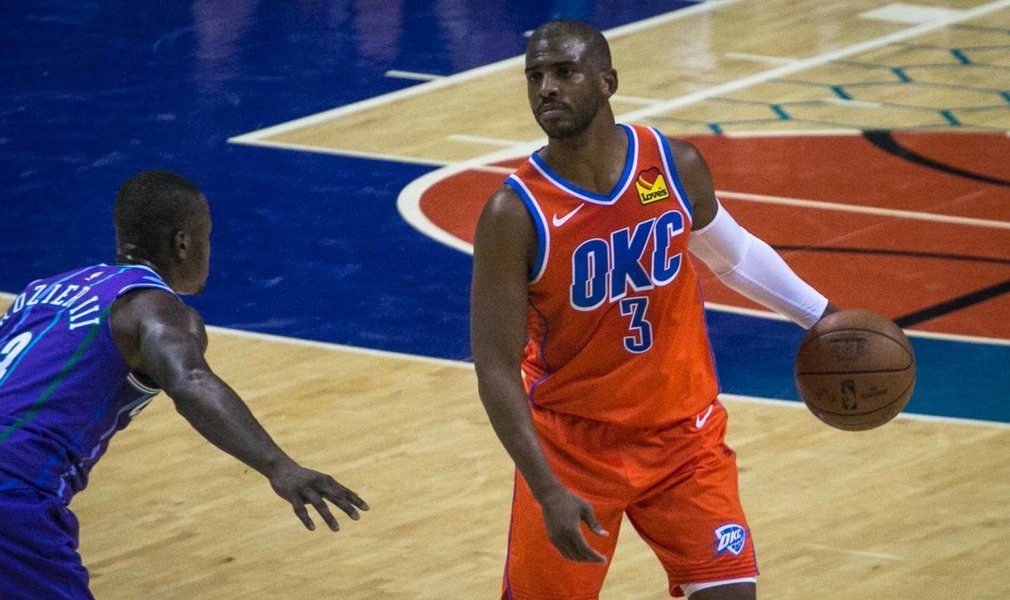 Facebook Twitter Copy URL
Copied
As Chris Paul tries to lead a young Thunder squad, the veteran point guard also wins a lot of love and praise from his teammates

CHARLOTTE, USA – Chris Paul was clearly ecstatic to be home in North Carolina. His hometown of Winston-Salem is just a one-hour drive away from Spectrum Arena.

“My grandparents were here which was special,” Paul said in a brief post-game interview before exiting the locker room to meet up with them.

“They just celebrated their 50th wedding anniversary. So, once a year, it’s always nice to be back home.”

Paul’s excitement level was high even before the game started. His dad, brother and nephew were also watching on the floor seats next to the visitor’s bench.

When he saw his nephew, he threw one of his warm-up jacket to him as his team made its way to the hardwood floor. He then proceeded to give them some hugs after getting a couple of warm-up layups in.

The last time he was in town, he donned the Houston Rockets red jersey. Now, he’s leading the charge for the Oklahoma City Thunder, a team filled with young players.

This is a Thunder team that’s different from the iteration that has played in the past two seasons. Shai Gilgeous-Alexander is clearly the centerpiece of this young nucleus. The second-year Canadian was traded, together with Danilo Gallinari and draft picks, from the Los Angeles Clippers for All-Star forward Paul George.

That trade also triggered trading away franchise player Russell Westbrook to the Rockets and landing Paul back to the Thunder. Oklahoma City fans were very much familiar with him having played his early years in front of them back in 2005.

Thunder head coach Billy Donovan was all praises for the 14-year point guard.

“He’s been great. Again, I attribute it to him being in the league for a long time,” Donovan said.

“He’s very detailed to every aspect of his body, to watching film as he prepares to play. So, I’m not really surprised just being around him and watching it on a daily basis.”

The young ones, too, are happy to have Paul on their side.

“Chris has played this game for a really long time. He’s seen everything,” said Gilgeous-Alexander after the Thunder slipped past the Hornets in a 104-102 overtime game.

“Obviously, he’s one of the best point guards to ever do it. Those type of crunch time moments come easy for him. Honestly, it’s just nice to see him how he navigates down the stretch. He’s just amazing.”

Off the court, he’s also been a great mentor for them.

“Who wouldn’t want Chris Paul on the team? I grew up seeing him,” second-year guard Hamidou Diallo told Rappler.

“For me to have him as a resource person is a blessing. Him having as mentor is great in the locker room. He’s going to give you the real. We don’t only talk about basketball. We talk about a lot of things happening on a day-to-day basis.

“He’s probably one of the guys on or off the court, he’s a person you could go and talk to. Most importantly, he talks about real life things, not just basketball.”

Paul has been instrumental in stabilizing the team. In the past 10 games, he’s averaged 30 minutes and has seen an uptick in points, assists and rebounds that are close to his career averages.

Donovan isn’t at all concerned with the heavy minutes.

“I communicate with him during the game. Obviously, the entire team has seen huge minutes. Steven Adams is close to 30. We have some guys besides Chris,” said Donovan.

“We’re going to need energy from everybody. For us, we get energy from a lot of different places. I’m not worried about Chris. I think he’s kept himself in incredible shape. I imagine we’re going to utilize the bench a lot.”

The Thunder sit at the 7th spot in the Western Conference with a 17-15 record. The team has won 11 of its last 15 games by Sunday night, December 29 (Monday, December 30, Philippine time).

Paul led the charge for the Thunder against the Hornets (16 points, 7 rebounds and 6 assists) and the Raptors (25 points, 11 rebounds and 8 assists) in their recent two-game road trip. The team is also 5-2 on the road for the month December.

“I think as he gets more comfortable with playing with 9 new players, he’s got a very pretty good feel and rhythm of how he can do that,” said Donovan. “He’s very, very brain smart. He really understands how to impact the game.”  – Rappler.com