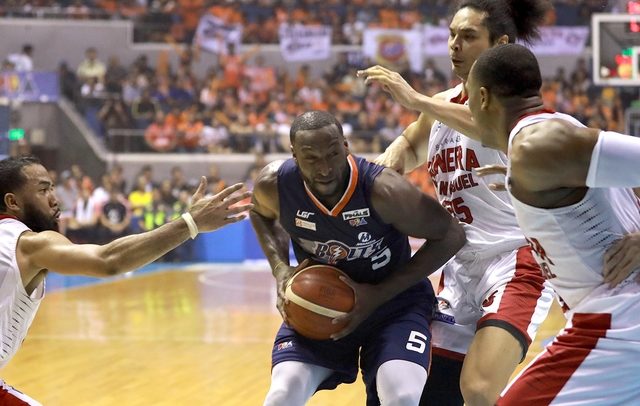 Facebook Twitter Copy URL
Copied
Allen Durham sees his potential game-tying layup denied by Japeth Aguilar, although he feels the referees should have called for a foul

MANILA, Philippines – Import Allen Durham felt he got the short end of the stick after Meralco fell short in taking Game 1 of the PBA Governors’ Cup finals against Barangay Ginebra on Tuesday, January 7.

Durham had his potential game-tying layup blocked by Japeth Aguilar with 11 ticks left as the Gin Kings escaped with a 91-87 win.

But Durham, who had a chance to knot the score at 89 with a drive attempt, said Aguilar should have been called for a foul. (READ: Aguilar wins game, trash talks Durham with key block)

“The last seconds of the game, in my opinion, I thought that was a foul. The video made it look like a foul. He was all over my shoulder,” said Durham, who saw his 25 points, 18 rebounds, and 10 assists go to waste.

Replays revealed Aguilar had his forearm pressed on the shoulders of Durham during the play, although the Bolts import eventually accepted the non-call.

“But I guess the refs said he got more ball than body,” Durham said.

For now, the two-time Best Import of the Conference wants to get back to the drawing board after he was limited to just 3 points in the final quarter en route to his lowest scoring output in the playoffs.

Durham averaged a whopping 33.3 points in 6 games in the quarterfinals and semifinals combined.

“You just got to bounce back, I got to shoot better,” said Durham, who shot a paltry 38.5% on 26 field goal attempts.

“We got great contribution and I didn’t perform to the best of my ability. I got to do better next game.”

Game 2 of the best-of-seven series will be staged in Lucena City at the Quezon Convention Center on Friday, January 10.

The last time Durham played in Lucena City, Meralco lost a finals game to Barangay Ginebra in 2017, but he hopes to have a different result this time around.

“We’ll get in the gym, we’ll look at film, and see where else we can attack. We’ll come back stronger in Game 2,” Durham said. – Rappler.com