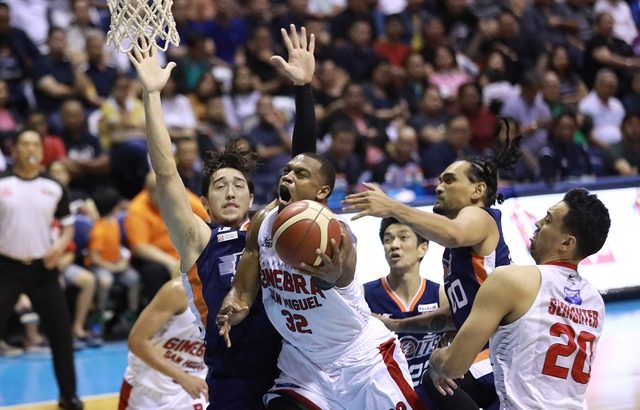 MANILA, Philippines – Barangay Ginebra weathered the storm of an inspired comeback from Meralco to regain the upper hand in the 2019-2020 PBA Governors’ Cup finals on Sunday, January 12.

Import Justin Brownlee flirted with a triple-double as the Gin Kings built a lead enough to stave off the Bolts and eke out a 92-84 win for a 2-1 lead in the best-of-seven series at the Araneta Coliseum.

Brownlee finished with 24 points, 9 rebounds, and 9 assists, including two dimes in the last two minutes that led to key LA Tenorio and Japeth Aguilar buckets, which helped Ginebra keep Meralco at bay.

Down by as many as 23, the Bolts fought back and got to within two possessions, 82-87, with two minutes left but could not complete the turnaround no thanks to Brownlee locating his open teammates.

Brownlee, who had only a single dime in the first two games combined, found Tenorio for a three-pointer for a 90-82 lead before assisting Aguilar for the layup that essentialy secured the win for the Gin Kings.

Aguilar had 23 points and 7 blocks, while Stanley Pringle churned out 21 points as the Ginebra capitalized on the untimely exit of Meralco big man Raymond Almazan, who suffered a suspected left knee strain.

Landing awkwardly after a drive attempt midway through the opening quarter, Almazan had to be carried out of the court and did not return.

Without Almazan patrolling the paint for the Bolts, Pringle took advantage and scored 17 third-quarter points as the Gin Kings turned a one-point halftime advantage to a 78-58 lead heading into the final frame.

“This is the kind of way we play,” said Ginebra head coach Tim Cone as his team recorded 23 assists, its most in the first 3 games. “We’re able to get some stops and get in the open court.”

“Stanley had a bunch of spectacular plays that really revved up the crowd and I thought just defensively, we did a much better job tonight in terms of controlling some of the guys we wanted to control.”

Meralco import Allen Durham put up 23 points, 13 rebounds, and 7 assists in the loss, while Chris Newsome had 24 points, 6 rebounds, and 3 assists.

Limited to just 11 points in the first 3 quarters, Durham scattered 12 points in the payoff period, but not even his late-game heroics could propel the Bolts to victory as the Gin Kings contained Newsome.

Newsome already had 20 points at halftime before struggling in the last two quarters, where he made only 2 of his 7 field goal attempts.

Game 4 is on Wednesday, January 15, at the same venue.