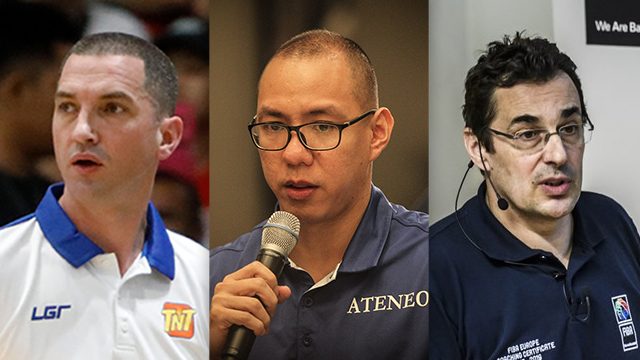 MANILA, Philippines – Even without an official announcement from the Samahang Basketbol ng Pilipinas (SBP), FIBA has gone ahead and revealed Mark Dickel, Sandy Arespacochaga and Nenad Trunic as part of Gilas Pilipinas’ coaching staff for the FIBA Asia Cup 2021 Qualifiers.

New Gilas program director Tab Baldwin clearly put his fingerprints all over the selection process as the team enters a retooling phase in the new decade.

Dickel formerly played under Baldwin for New Zealand’s 2000 and 2004 Olympics campaigns while Arespacochaga has been Baldwin’s longtime lead assistant in the UAAP championship-winning Ateneo Blue Eagles.

Trunic, meanwhile, is a 51-year-old Serbian coach who most recently handled Iran’s youth program. He also played with NBA greats such as Toni Kukoc and Vlade Divac way back in the 1980s in the former Yugoslavia’s youth team.

Gilas’s new coaching trio will have a challenging time ahead of them as they work with a pool consisting mainly of young stars like Thirdy Ravena, Kobe Paras, Rey Suerte, Allyn Bulanadi and CJ Perez.

The team will get its first test of the Asia Cup Qualifiers on February 20 as it faces Thailand.

Given the program’s youth-oriented coach and player pool for their first tournament of the decade, it’s safe to assume that the new age of Gilas is already underway. – Rappler.com