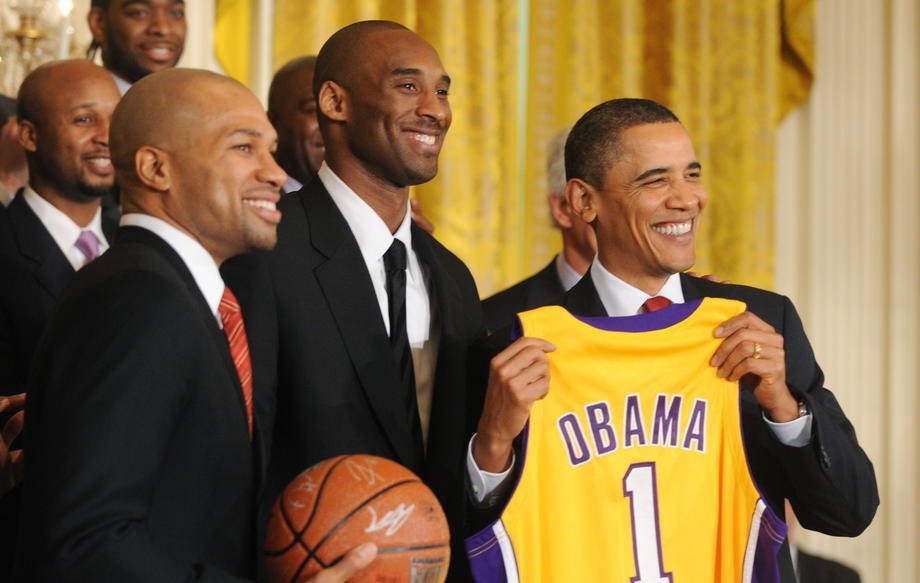 Reports of Bryant’s death sent shockwaves throughout the world, with fellow stars and celebrities expressing disbelief at the news.

“Kobe was a legend on the court and just getting started in what would have been just as meaningful a second act.”

“I’m stunned,”Words can’t even come close to describing it. Just an incredibly sad and tragic day.”

“Jeannine & I are absolutely shocked to hear of the loss of one of my favorite people & one of the best basketball minds in the history of the game! Our hearts & prayers to Vanessa & his girls. @kobebryant you were my biggest fan, but I was yours”

“Most people will remember Kobe as the magnificent athlete who inspired a whole generation of basketball players. But I will always remember him as a man who was much more than an athlete.”

“I’m heartbroken by this news, you were a true legend, and friend. Rest In Peace @kobebryant, my thoughts and prayers to his wife and kids.”

Kobe was a legend on the court and just getting started in what would have been just as meaningful a second act. To lose Gianna is even more heartbreaking to us as parents. Michelle and I send love and prayers to Vanessa and the entire Bryant family on an unthinkable day.

“Kobe Bryant, despite being one of the truly great basketball players of all time, was just getting started in life. He loved his family so much, and had such strong passion for the future. The loss of his beautiful daughter, Gianna, makes this moment even more devastating….”

“Just devastated to hear about #KobeBryant. An extraordinary athlete, and a genuinely kind, wonderful man. Sending love, prayers & compassion to his family. To his entire @NBA family as well.”

“It can’t be. You always encouraged me mamba. Gave me  some of the best quotes that we smile about to this day.! Love you man!”

“Like everyone, I’m stunned and saddened to hear the horrific news about Kobe Bryant. Thoughts are with his family and loved ones at this terribly sad time #RIPKobeBryant.”

“@kobebryant Gone much too soon, how devastating to hear of his passing, he gave joy to so many for so long – deep condolences to his family, his friends, his Laker family. RIP Kobe… #lifeistooshort.”

Jeannine & I are absolutely shocked to hear of the loss of one of my favorite people & one of the best basketball minds in the history of the game! Our hearts & prayers to Vanessa & his girls. @kobebryant you were my biggest fan, but I was yours #RIPMAMBA @NBA @espn @SLAMonline pic.twitter.com/Ll0BD6VWgr

“We miss you already Kobe.”

“I truly can’t believe this. My heart is so heavy. Rest In Peace Kobe. What an unimaginable loss. All of my prayers to your loved ones.”

“Kobe Bryant you’re an angel. RIP to you legend. So kind and had time for everyone. The epitome of class and hard work. An Idol. Prayers to his family.”

“On behalf of myself, the players and staff at AS Roma, we join the rest of the sporting world in mourning the tragic passing of Kobe Bryant. Kobe was a true icon and our thoughts are now with his family and the families of all of the victims aboard that flight.”

– Jim Pallotta, the owner of Italian football giants AS Roma

“I just found out 5 minutes ago and I still can’t believe it… Another example of how fragile life is, let’s enjoy it while we can. (And avoid helicopters until they are safer). DEP Kobe and the other 5 victims.”

“LA has lost one of our true superstars. Stunning to hear about the tragic and untimely death of #KobeBryant My heart goes out to his family and all the fans who will feel this loss so deeply.”

“Kobe Bryant was a giant who inspired, amazed, and thrilled people everywhere with his incomparable skill on the court — and awed us with his intellect and humility as a father, husband, creative genius, and ambassador for the game he loved.

“Kobe will live forever in the heart of Los Angeles, and will be remembered through the ages as one of our greatest heroes.”

“My biggest sports idol is this man right here. Your work ethic and mentality inspired me so much from as soon i understood what it took to become a pro. You were enjoying your new chapter in your life and to leave us just like that is devastating.. i love you so much! You the goat”

– Inter Milan’s Belgian striker Romelu Lukaku on Instagram, with a photo of Bryant

“Rest in peace Kobe. One of the best sportsmen/athletes that has ever lived. My heart goes out to his family and to all involved in this terrible accident”