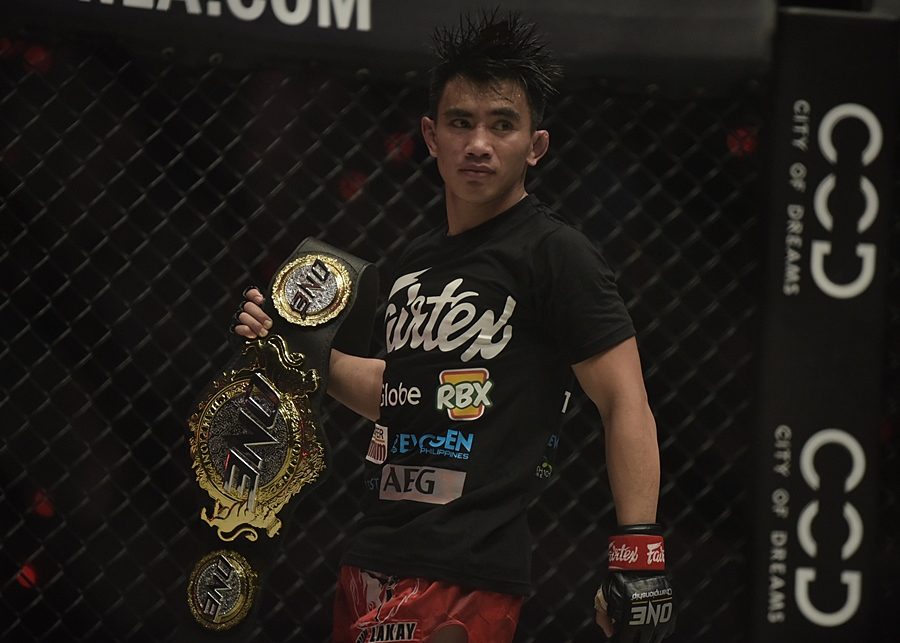 MANILA, Philippines – Joshua “The Passion” Pacio (16-3) retained his ONE strawweight belt as he edged Brazilian challenger Alex “Little Rock” Silva (9-5) via split decision in the ONE Championship: Fire and Fury on Friday, January 31 at Mall of Asia Arena.

Pacio showed masterful defense and executed his game plan flawlessly in the opening round that made his foe work on his feet.

Silva answered back in the 2nd round and displayed his grappling advantage over the reigning champion, who still sustained his impressive defense that saved him from a deep triangle attempt from Silva late in the round.

The momentum swung back-and-forth in the 3rd and 4th rounds as Pacio landed clean punches and combinations while Silva continued to take down the Filipino striker.

The Brazilian grappling master stuck to his ground game in the final round, but couldn’t connect a clean submission attempt as Pacio matched Silva’s offense with ease.

With the close win, Pacio has now won against all former ONE strawweight champions.

The Benguet native also wrapped up an almost perfect night for Team Lakay, which won 4 of its 5 bouts.

Coming from a lost against Demetrious “The Mighty Mouse” Johnson in the ONE Flyweight Grand Prix, Danny “The King” Kingad (15-2) crashed back to the win column and outgunned his Chinese challenger Xie “The Hunter” Wei (11-3) via unanimous decision.

Xie caught Kingad’s kick and landed a right hand that dropped the Filipino brawler to the floor. Kingad then displayed impressive ground defense and managed to slam Wei to the canvas, enough to regain the upper hand right before the time ended.

The Chinese fighter pinned Kingad to the fence in the 2nd round, where they exchanged heavy hits to the leg and body as “The King” wrapped up the round with a spinning back elbow that Xie blocked.

Kingad hung on by a thread and leaned on his defense in the final round to stop the aggressive offense of his foe. Xie’s momentum then got spoiled because of the two illegal blows that were called against him.

With the win, Kingad has now won 7 of his last 8 fights and ended Xie Wie’s five-match streak.

Lito “The Thuder Kid” Adiwang (11-2) fulfilled his promise and delivered a thunderous win in front of the home crowd as he submitted Pingsiri “The Smiling Assassin” Mitsatit of Thailand via kimura lock in the opening round.

Adiwang quickly turned hot and dropped Mitsatit to the ground after landing a barrage of strikes.

The 26-year-old fighter then showcased his floor game and caught the Thai’s arm that led to the winning submission attempt.

Adiwang made his debut in the ONE Championship main roster last October against Japan’s Senzo Ikeda, where he also won via submission.

Gina Iniong gets Team Lakay off to a hot start with a unanimous decision win over Asha Roka! #WeAreONE #ONEChampionship #FireAndFury pic.twitter.com/zRbSRdnIZz

Surprisingly, the 2019 SEA Games kickboxing gold medalist decided to bring the fight to the ground as she pummeled the Indian fighter with body punches in the opening round.

Roka landed a pair of clean strikes at the beginning of the 2nd round, but Iniong immediately put her foe back on the canvas and wrapped up the round with a failed guillotine choke.

Iniong continued to execute her game plan in the final round and gathered enough points to pick up her back-to-back wins.

In the co-main event, Eduard “Landslide” Folayang (21-8) dropped his match against Pieter “The Archangel” Buist (17-4) via split decision.

The former ONE lightweight champion did not waste any time and showcased his patented spinning back elbow and wrapped up the opening round with a guillotine attempt and a knee to Buist’s head.

Folayang even managed to chop down his giant foe in the 2nd round and landed a few punches on the ground. But Buist quickly countered with a failed triangle attempt that leveled the fighter’s momentum.

Buist completely utilized his size advantage in the final round and punished Folayang’s spinning back fist with a solid right kick to the head that completely stunned the 35-year-old Filipino hero. Folayang scored another take down late, but not enough to finish his last-minute opponent.

The bout between Jomary “The Zamboanginian Fighter” Torres (4-4) and Jenny Huang from Taipei concluded in a no contest due to a pair of unintentional fouls that immobilized the Filipina brawler.

Torres had a strong start and landed a solid right hand on Huang’s chin, but the referee momentarily stopped the match after Torres absorbed an accidental blow.

The 23-year-old Filipina out of Catalan Fighting System, who dropped 4 straight bouts, recovered on time and continued to land accurate strikes, including a right elbow that stunned Huang.

But Torres got hit by another accidental blow that forced the referee to stop the match and declared the bout a no contest.

ONE: Fire and Fury results