‘He was my everything’, says Vanessa Bryant in tribute to Kobe 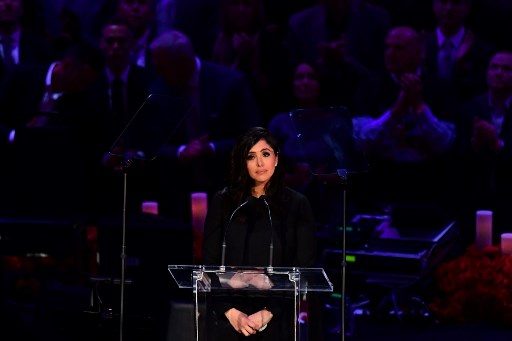 Facebook Twitter Copy URL
Copied
'I'll never get to see my baby girl walk down the aisle, have a father-daughter dance with her daddy,' says Vanessa Bryant in an emotional speech

LOS ANGELES, USA – Bryant’s widow Vanessa paid a tearful tribute to her late 41-year-old husband and middle daughter, saying she could not fathom life without them and describing Bryant as “my everything.”

“God knew they couldn’t be on this earth without each other,” said Bryant about Kobe and Gianna in her first public remarks since the January 26 crash. “He had to bring them home together.”

She spoke of her heartbreak at not being able to watch Gianna – who was 13 and one of 4 daughters the couple had – grow up and missing important moments of her life.

“I won’t be able to tell her how gorgeous she looks on her wedding day,” she said through tears, receiving a standing ovation for the tribute.

“I’ll never get to see my baby girl walk down the aisle, have a father-daughter dance with her daddy.”

“He was my everything.”

Vanessa Bryant remembers Kobe at the Celebration of Life. pic.twitter.com/vHb9xP0qmm

On the same day, Bryant filed a lawsuit against the operators of the helicopter that crashed on January 26, killing the NBA icon and eight others.

Vanessa and Kobe met on the set of a video shoot for which she was modeling. She was 17 and a senior in high school at the time.

They were engaged in 2001 before getting married 6 months later. They had 4 daughters together. The oldest Natalia is 17 while Bianka is 3 years old and Capri just 7 months.

Kobe’s parents didn’t attend the wedding, partly because Kobe’s father was uncomfortable with Vanessa being Latino instead of African-American. – Rappler.com