How timely sacrifices drew Lito Adiwang closer to his dreams

Mar 2, 2020 6:27 PM PHT
Rappler.com
Facebook Twitter Copy URL
Copied
After putting his dreams on hold to make ends meet, Lito Adiwang works his way to becoming one of the most exciting strawweights in ONE Championship 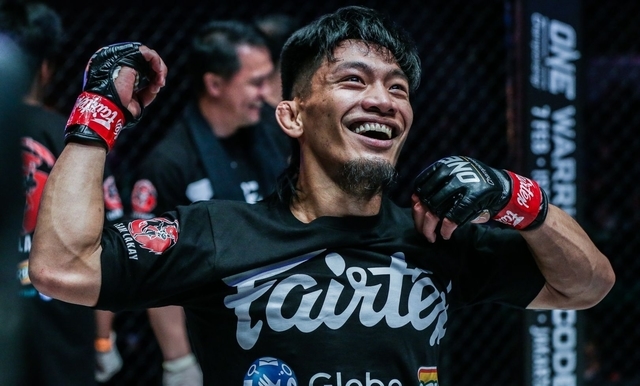 MANILA, Philippines – Once upon a time, Lito Adiwang dreamed of making it big in the world of martial arts.

But before becoming one of the most exciting athletes in ONE Championship, Adiwang had to traverse a difficult path – one that dates back to 2006 when he was just a 12-year-old boy living day-by-day.

“That’s when I started really getting involved with martial arts. I got encouraged when I was watching Manny Pacquiao as a 12-year-old kid,” Adiwang said.

“That’s when my dream and imagination started kicking in. I thought, one day, I want to do that, I want to become a champion.”

But while Pacquiao wore the crown in boxing, “Thunder Kid” set out to conquer a different martial art – wushu.

Under the watchful eyes of Mark Sangiao and Team Lakay, Adiwang blossomed into one of the finest young wushu athletes in Baguio City.

That move prompted his transition to mixed martial arts, where he competed in a local show in the City of Pines. (READ: How Lito Adiwang found a way to fulfill his dream)

“I was training with Team Lakay on my basic wushu, but my first MMA match wasn’t with them,” Adiwang said.

“It just so happened that there was an opportunity to compete in MMA in Baguio and I took it.”

Adiwang went on to win 4 of his first 6 matches, but during that time, mixed martial arts was not a stable source of income for the young Filipino.

He put his dreams on hold to make ends meet. He found a job opening in Malaysia to become a full-time trainer and he packed his bags for greener pastures.

It was not until he stumbled upon a ONE Championship event in Kuala Lumpur where his passion for the sport was reignited.

Seeing familiar faces like Eduard “Landslide” Folayang and Geje “Gravity” Eustaquio from Team Lakay take home victories at ONE: Clash of Heroes in 2016, Adiwang reminded himself why he loved the sport.

He then visited Sangiao and humbly asked if he can return to the team and train with them full-time when he returned to the Philippines.

But there was one thing holding him back – income. As fate would have it, though, luck was on his side.

“That time I just got a raise in salary, so I was really caught in a dilemma. When I talked to them about my decision, they even doubled-up on the offer. They told me I was going to be a partner of the gym, and that brought me stability.”

The 26-year-old, who once put his dreams of competing on hold for a stable career, once again had to contemplate a life-changing decision. (Read: How Lito Adiwang’s homecoming set him up for breakout success)

In the end, it was his competitive nature that won.

“It’s a different feeling. Yes, I love coaching, I love teaching people, but I feel like it’s not complete. I’d rather do the things that I’m asking people to do,” Adiwang said.

“That’s what brought me back. That drive. Coaching is good, but I feel like it’s not for me, yet.”

Two years later, Adiwang was back in the mountains of Baguio City, but he had to earn his stripes.

Instead of jumping right into ONE Championship, he had to prove himself on the ultimate testing ground, Rich Franklin’s ONE Warrior Series.

“I thought I was going straight to the main roster when I returned to Team Lakay,” Adiwang said.

“Then one time, coach told me that there will be scouts coming, Rich Franklin himself. It was eventually for the Warrior Series.”

While his teammates made waves in the big league, Adiwang proved his worth in the promotion’s developmental arm.

Instead of looking at it as a relegation, the Filipino took the opportunity by the horns and blasted through Manuel “Tick” Huerta, Alber Correia “Macgyver” Da Silva, and Anthony “The Antidote” Do en route to winning a 6-figure contract to the main roster of ONE Championship. (WATCH: Rich Franklin’s ONE Warrior Series | Best Of Lito Adiwang)

“Investment is the right word. I never thought of something negative, I always looked at the big picture and thought of what I would gain there,” Adiwang said.

“I got exposure, I got confidence, I shook off ring rust. That was a very good opportunity to build me up. Looking back, it was a great decision.”

Adiwang is now one of the biggest names in the strawweight division.

He beat Japanese veteran Senzo Ikeda at ONE: Century Part I by a first-round TKO in October 2019. Pongsiri “The Smiling Assassin” Mitsatit was his next victim 3 months later after he submitted the Thai in one round at ONE: Fire & Fury in front of his hometown crowd at the Mall Of Asia Arena.

The consecutive wins did wonders for the Filipino warrior. Not only did it boost his confidence to a whole new level, it also allowed him to finally do the things he always wanted for his loved ones.

“Now that I am here, this only strengthened the bond of my family. Every chance I have now, we go out, do activities, things we weren’t able to do before. I also got our old house renovated so we could all be there,” Adiwang said.

“I was just imagining this back then. I really wanted to give them a good life, a comfortable life. Now I want my parents to experience the things that they haven’t experienced yet.”

And while Adiwang has finally accomplished some of his goals, he reminds everyone he is far from done.

Just like any other athlete, his goal is to have a gold-plated strap around his waist, and he will stop at nothing to accomplish the tall order.

“Now, they’re watching. And I promise to bring the same kind of energy each time I fight,” Adiwang said.

“I am not done yet. Every time I complete, I’ll give my best to finish the fight in spectacular manner and one day become a world champion.” – Rappler.com