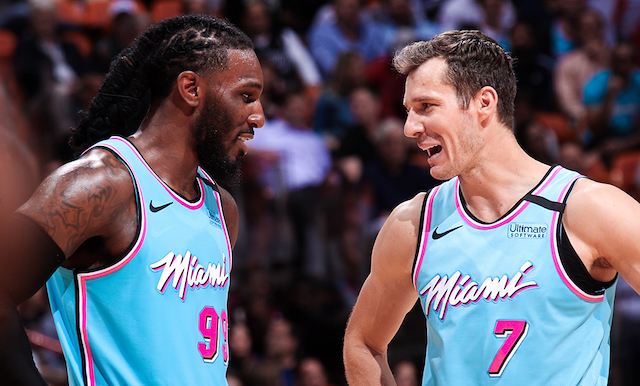 MIAMI, USA – Jae Crowder scored 18 points off the bench as the Miami Heat locked down Giannis Antetokounmpo to hand the Milwaukee Bucks a 105-89 defeat on Monday, March 2.

Crowder led the scoring for the Heat as NBA MVP Antetokounmpo was held to 13 points at Miami’s American Airlines Arena.

The defeat was only Milwaukee’s ninth loss of the season and helped Miami improve to 39-22 in the Eastern Conference playoff race.

The Bucks remain firmly in control of the conference standings, leading with a 52-9 record ahead of second-placed Toronto, who are 42-18.

But the previously all-conquering Bucks were given plenty of food for thought ahead of next month’s playoffs after a superb Miami display.

Crowder led the Miami scoring along with Jimmy Butler, with both players finishing on 18 points.

No fewer than six Miami players cracked double digits, including center Bam Adebayo who also had a huge night defensively.

Brook Lopez led the Milwaukee scoring with 21 points but it was a night to forget for Antetokounmpo, who made only six of 18 shooting attempts.

But the Rockets were always chasing the game after falling behind in the first quarter as the Knicks pulled away to lead by 21 points at one stage.

RJ Barrett top-scored with 27 points for the Knicks, who had seven players make double figures.

Barrett sealed the win with a driving hoop with 7.6 seconds remaining to mark the era of new team president Leon Rose – who officially joined the Knicks earlier Monday – with a victory.

Power forward Julius Randle had 16 points – and 16 rebounds – while Bobby Portis and Wayne Ellington both delivered 15 points each from the bench.

The victory lifted the Knicks into 13th place in the Eastern Conference standings with 19 wins and 42 defeats.

The Rockets fell to 39-21 in the Western Conference, where they remain in 4th spot.– Rappler.com