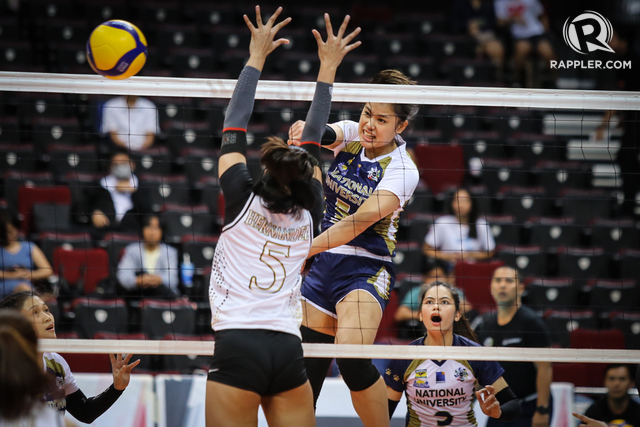 MANILA, Philippines – A student-athlete must always learn how to balance her life on and off the court.

Unfortunately for NU Lady Bulldogs veteran Risa Sato, she steered her focus away from the classroom in UAAP Season 81, resulting in a suspension from the team due to academic deficiencies.

Now back with the team for the new season, the 25-year-old is ready to give it her all in her final year in the collegiate ranks.

(Before the game, I was already so excited. When we played it’s like ‘give it to me,’ that’s what I was thinking. Even with just eye-to-eye contact, they already understand that I’m here to fight. I just controlled myself and enjoyed.)

Sato’s relaxed demeanor in her first game back with the team certainly paid dividends, as she chipped in 17 points off 10 attacks and a game-high 7 blocks in the hard-earned win.

Even though she’s just in her second collegiate season in her final year of eligibility, head coach Norman Miguel still saw it fit that Sato would lead the team as the captain for Season 82.

(When we made Risa the team captain, she gave a system to our team and a part of our coaching staff. Our work was being lessened when it came to disciplining the kids. Being a Japanese player, little by little she was inputting a system on how to be disciplined like a Japanese player.)

Now that she’s the designated “ate” (aldersister) of the team, Sato is willing to impart what wisdom she can give to fast-track the program’s rebuild even after she’s moved on to the next level.

(I really need to be the ‘ate’ because we have rookies, so I really need to work. If they feel nervous, I’ll just approach them. ‘Happy happy, smile smile smile,’ I just said to them. I was so excited earlier. I was noisy and rowdy. Of course I’m the senior now so I guided every move of the team.) – Rappler.com