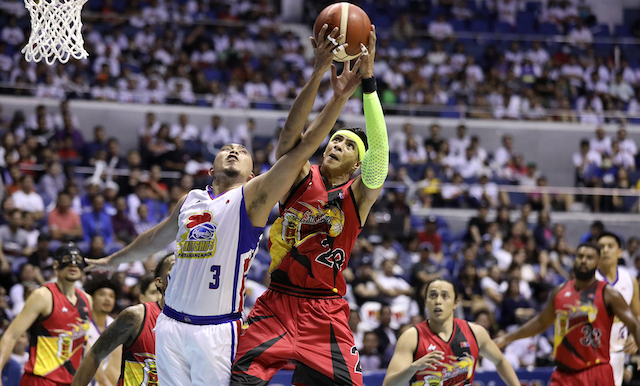 MANILA, Philippines – Life without June Mar Fajardo started on a high note for San Miguel after it kicked off the 2020 Philippine Cup with a 94-78 win over Magnolia at the Araneta Coliseum on Sunday, March 8.

Competing at a high level was a concern for the Beermen going into the 45th season with Fajardo expected to miss an entire year due to his shin injury, but the reigning five-time All-Filipino champions proved their mettle.

Mo Tautuaa, who was touted to fill the void left by the defending six-time MVP Fajardo, lived up to the billing with 20 points, 11 rebounds, and 2 blocks as 4 of his teammates also finished in double figures.

Fired up from being named the Most Improved Player earlier in the day, Tautuaa unloaded 12 points in the first half to help San Miguel seize a 45-33 lead – an advantage the team maintained in the last two quarters.

The Hotshots narrowed the gap to 56-63 off back-to-back Jio Jalalon buckets, but that was the closest they could get as the Beermen restored order in the final quarter behind Terrence Romeo and Arwind Santos.

Romeo fired 19 points on top of 7 assists, Santos churned out 18 points, 15 rebounds, and 5 steals, while Marcio Lassiter chimed in 17 points, 5 rebounds, and 2 blocks in the convincing victory.

The game was rematch of the Philippine Cup finals last season that went the distance in 7 games, but Magnolia hardly looked like the same team as it trailed by as much as 23 points, 37-60.

Alex Cabagnot came off the bench with 10 points and Chris Ross contributed 4 points, 7 assists, 5 rebounds, and 3 steals for San Miguel.

Paul Lee paced the Hotshots with 19 points and 5 rebounds, while Ian Sangalang had 16 points and 11 rebounds.

New boy Jackson Corpuz, who was acquired by Magnolia in a trade from Columbian, added 16 points and 13 rebounds in the loss.