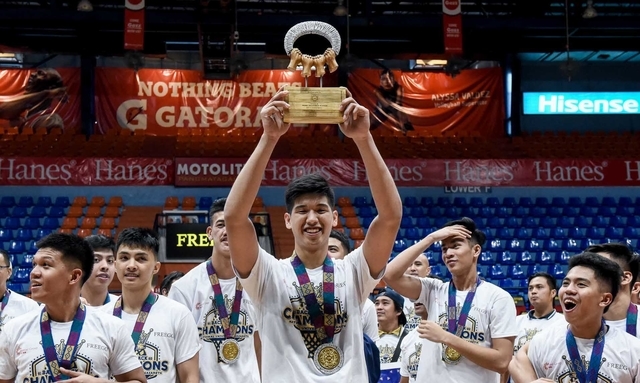 MANILA, Philippines – Another season, another UAAP juniors title for the NU Bullpups.

The powerhouse Bullpups wrapped up the Season 82 boys’ basketball tournament with a resounding 16-0 sweep following an 87-80 win over the FEU Baby Tamaraws at the Filoil Flying V Centre on Monday, March 9.

NU led from start to finish in the match that was held behind closed doors due to the novel coronavirus outbreak to extend its winning run to 27 games and lift its fifth championship over the last 9 years.

The Baby Tamaraws managed to cut what was once a 17-point deficit to 72-79 but the Bullpups retaliated as seniors Kevin Quiambao, Carl Tamayo, and Gerry Abadiano delivered the killer blows in the final 4:02 minutes.

NU duplicated the feat achieved by the Ateneo Blue Eagles and the NU Lady Bulldogs, who also went unbeaten in 16 games to win the title earlier in the season.

Tamayo, who was named the Finals MVP, produced a monster double-double of 26 points and 22 rebounds, ending the best-of-three series with eye-popping averages of 19.0 points and 18.0 rebounds.

Abadiano added 20 points, 5 boards and 3 assists, while Terrence Fortea chipped in 12 points and 4 assists for the Bullpups.

“It is gratifying because all our hard work paid off,” said Bullpups head coach Goldwin Monteverde, who will handle the senior team in September.