How Denice Zamboanga ended up in Thailand 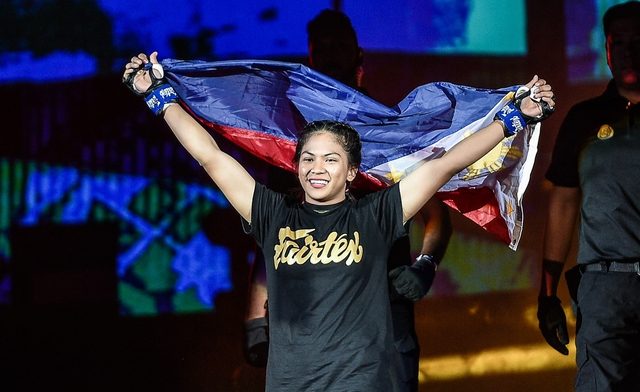 MANILA, Philippines – Denice “The Menace Fairtex” Zamboanga introduced herself to the world with a resounding performance in the ONE Championship: King of the Jungle against Mei “V.V” Yamaguchi en route to a clear-cut unanimous decision win in Singapore.

While she was raised and born in the Philippines, Zamboanga prepares in a different country altogether. She trains at the famed Fairtex Gym in Pattaya, Thailand, where she gears up with the likes of ONE atomweight muay thai world champion Stamp Fairtex.

So how exactly did she get there? It started when she turned heads competing in local competitions while being trained by her older brother, Drex Zamboanga. (READ: Phogat, Banario, Zamboanga win in ONE: King of the Jungle lead card)

But with a steady job, the 23-year-old was not too sure at first when the opportunity to train at Fairtex presented itself.

“They were looking for a female MMA fighter before, that was 3 years ago but I wasn’t really committed to fighting back then,” Zamboanga said.

“I was working for the government, so I told them, I’m not that prepared to train in another country yet, because I need a financial allowance for that.”

But her competitive fire only burned stronger.

Not satisfied with her routine desk job, Zamboanga eventually took the jump.

“The turning point was when my mind was already in training sessions during the times that I was working, and around that time, the offers from different organizations were already coming,” Zamboanga said.

“When the time came that I was already decided, I contacted them, and asked if I can come and join the team and that was that.”

Moving to a different country might be scary for some, but “The Menace Fairtex” is enjoying every second of her journey in “The Land of Smiles.”

Homesickness sometimes kicked in, but not everyone gets the chance to work in a world-class gym while being inculcated in a different culture.  (WATCH: Mei Yamaguchi vs Denice Zamboanga | ONE Full Fight | February 2020)

“It’s hard because I had to stay away from my family but that’s it. The language and culture barrier isn’t a big factor for me. I respect their culture and it’s nice trying to learn new language.”

Her decision to move to Thailand back in 2019 is slowly paying dividends.

With two wins over two quality opponents, Zamboanga has earned herself a date with destiny. She is slated to challenge longtime ONE women’s atomweight world champion “Unstoppable” Angela Lee sometime this year.

From making her decision to move to Thailand less than a year go, she is now a real challenger to the crown – and even she cannot believe how fast the opportunity has come. (READ: Denice Zamboanga talks Yamaguchi win, world title shot)

“I never expected to be in this position this quickly. I didn’t expect to rise so fast, so soon. That’s why I’m just so thankful that I was given hard fights early, that I got to face the top contenders,” Zamboanga said.

“I’m so overwhelmed. I can’t express how happy I am that my dream fight with my idol is already happening. That fact that it came straight from the ONE Championship boss (Chatri Sityodtong), I’m really ecstatic about it.”

Now she plans to make history by becoming the first Filipina to win a world title in ONE Championship.

“It will be huge for me to represent my country and make them proud. If I become the first Filipina world champion, it would be historic. But I’ll take it one step at a time,” she said.

“If I become a champion, that’s for the lord and for my country,” Zamboanga said about the possibility of competing at ONE: Infinity 2  in Manila this May.

“That’s what we’re hoping for. Becoming a world champion in my own country will be a dream come true.” – Rappler.com