Facebook Twitter Copy URL
Copied
Already touted as one of the best volleyball players in the country, Jaja Santiago believes she has grown a lot more in the last two years in Japan

MANILA, Philippines – With her extraordinary height and spiking power, Jaja Santiago was already considered as one of the best volleyball players in the country even before she made it to the international front.

After playing for Japan V-League Ageo Medics for close to two years, Santiago believes she has grown to be a completely different player both in skills and attitude.

(Before in my college team and in Foton, they always say that I’m the go-to person inside the court. But in Japan, I learned how to trust my teammates and not be selfish.)

(At first I was thinking: ‘Why are they not giving me the ball? Why does it seem that the setter doesn’t trust me? I’m also an import here. But as the days went by, I was the one asking myself: ‘Why is my attitude like this? I’m not the only one who should be scoring. It should be the whole team. That’s how I learned to trust my teammates.)

Santiago, though, did not expect to have these realizations as she only dreamed of playing abroad.

Midway through her UAAP stint with National University (NU), the 6-foot-5 middle blocker was highly recruited by international teams like US NCAA squad University of California-Los Angeles (UCLA) in 2013 and Thailand League team Bangkok Glass in 2017.

But she turned down the offers to complete her full UAAP eligibility with the Lady Bulldogs and wait for a better time to take her talents to the international stage.

(The most important thing I learned is professionalism because they are so focused here. They don’t have other activities. It’s just volleyball.) 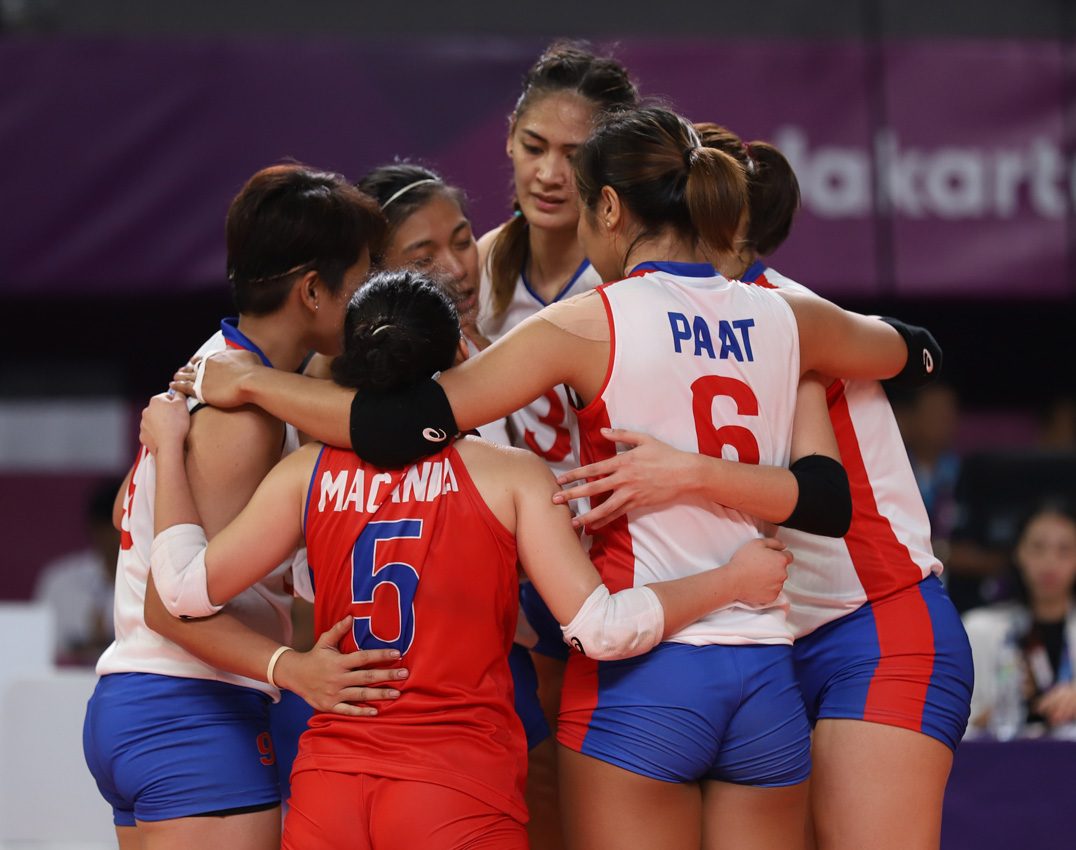 But in order to attain a certain level of growth, Santiago had to skip several national team tournaments, the last during the country’s hosting of the 2019 Southeast Asian Games, where the Philippine women’s volleyball team wound up last place.

As the regional biennial meet fell on November, she was not given the go-signal to represent the country as it coincided with the Japan V-League season.

(I was really sad that I didn’t get to play in the SEA Games because of course, that’s still another opportunity and it’s different when you represent your own country, but things really happen.)

Instead of dwelling on her missed opportunity, Santiago made sure that she would bring glory to the Philippines as she chipped in 9 points to propel Ageo Medics to a 3rd place finish in the V-League.

(Even though I wasn’t able to play in the SEA Games, I still represented the country when I played in Japan, so although I was sad, it still turned out for the better because my team won 3rd place.

It wasn’t for the Philippines, but winning 3rd place with my team in Japan, there was still someone from the Philippines who was part of that, right?)

Santiago last donned the country’s colors in the 2018 Asian Games, where the team wrapped up its campaign with an 8th place finish. While Santiago spent her season break in the Philippines – she wasn’t able to fly back to Japan as tournaments were canceled due to the coronavirus pandemic – she recalled the many times she wanted to give up on her dream and settle back in the Philippines.

It was great that she’s finally improving her skills, she said, but there were times when frustrations got the better of her as she tends to compare herself to her teammates.

(When I play for the team, I don’t feel the pressure, but it’s like I’m the one putting pressure on myself because my teammates are good. There’s another import with me, but I have to make sure that my skills are competitive enough against the local members.)

But Santiago is grateful that her teammates are caring and thoughtful enough to keep her company, even putting effort to communicate with her despite the language barrier. She is also close to Katarina Barun, the Croatian import of her team.

(Japanese-English communication is difficult. They’re not as well-versed in English, but you can see how willing they are to learn. As in they use Google translate until they are able to learn the language and I also slowly learn their language.)

One of Santiago’s highlights in her Japan stint that made her feel closer to home was when she faced her sister Dindin Santiago-Manabat, who is also seeing action in the Japan V-League with the Kurobe AquaFairies.

The twin towers’ teams have faced each other many times, but the younger Santiago recalled a moment last year when they got fielded on court at the same.

(When I was inside the court then they subbed her in, I said: ‘This is it.’ In a way, I was nervous for her and happy for her, but no, I had to focus because she’s my opponent. But every time, she was able to spike, I wanted to cheer for her, but I couldn’t.)

While waiting for their league to resume, both Santiago sisters can train together anew at home before parting ways again. – Rappler.com