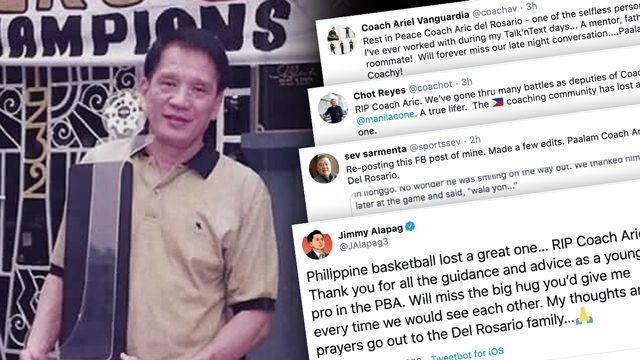 In the collegiate scene, Del Rosario led the University of Santo Tomas (UST) Growling Tigers to their first 14-0 sweep in 1993, an incredible run that kicked off a four-peat UAAP title romp until 1996.

Known as “Tatay Aric” in the local basketball community, he helped shape many young careers in UST from 1992 to 2003 and touched more lives in his stints in the PBA and the national team. (READ: Tim Cone crushed by Aric del Rosario death: ‘He always kept me grounded’)

Rest in Peace Coach Aric del Rosario – one of the selfless person that I’ve ever worked with during my Talk’nText days… A mentor, father, and roommate! Will forever miss our late night conversation….Paalam Coachy!

In 1998, Cone together with Del Rosario and Reyes, steered the Philippine Centennial team to an Asian Games bronze.

RIP Coach Aric. We’ve gone thru many battles as deputies of Coach @manilacone. A true lifer. The coaching community has lost a great one.

Former Gilas stalwart Jimmy Alapag recalls that Del Rosario, who guided him at the start of his PBA career, was fond of hugging his players and colleagues.

Philippine basketball lost a great one… RIP Coach Aric. Thank you for all the guidance and advice as a young pro in the PBA. Will miss the big hug you’d give me every time we would see each other. My thoughts and prayers go out to the Del Rosario family…

Veteran sports broadcaster Sev Sarmenta also shares his experience on how Del Rosario would spot the smallest details during trainings and how generous he was to others.

Re-posting this FB post of mine. Made a few edits. Paalam Coach Aric Del Rosario. pic.twitter.com/mCKq5mFPjZ

“My sincerest condolences to the family of coach Aric del Rosario. He was one of the gentlest and most soft spoken mentors I have ever known. RIP Coach. You will never be forgotten,” tweeted Eala.

to the bereaved family of #coacharicdelrosario, all #Thomasians as well as the whole community who are saddened by this great loss.

My 1st taste of intense #uaap action was, if memory serves, in Game 3 at Cuneta when the #ustgrowlingtigers bagged the chip.#1forcoacharic


When you’re hired to teach young men to run around & put a ball into a hoop AND you end up being called #TatayAric, you know you did right.

A statement from UST highlights how Del Rosario was a lifer with the España-based squad as he started out as a basketball player in the 1960s before shifting to coaching.

The MPBL, where the late UST legend ended his decorated coaching career and served as the first coach of the Parañaque Patriots, calls him a “revered figure”  who had “his fingerprints in the careers of his former players.”