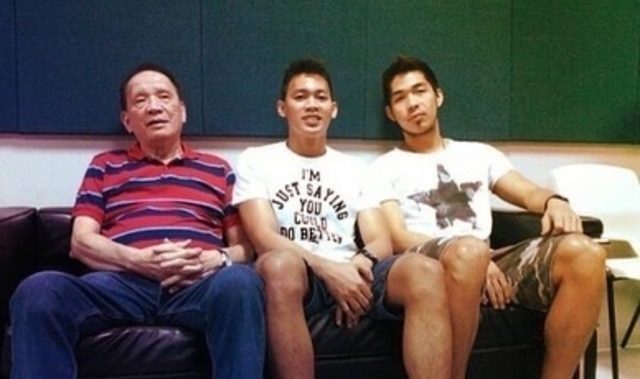 MANILA, Philippines – PBA star guard Scottie Thompson paid tribute to Aric del Rosario, saying the late great basketball coach is one of the biggest reasons behind his success in the professional ranks.

Del Rosario, who coached Thompson for the Perpetual Altas in the NCAA, died from cardiac arrest on Thursday, March 26, at 80.

“This is one of the saddest and most shocking news I’ve ever received in my life,” Thompson wrote in Filipino on Instagram.

“Up to the PBA, I’ve brought with me all the lessons you told us – work hard, play well, be good, always pray, and most importantly, accept everything you have. You want something greater? Work hard for it.”

Under the tutelage of Del Rosario, Thompson developed into one of the best collegiate players in the country.

Thompson won the Most Improved Player in 2012, captured the Most Valuable Player in 2014, and ended his collegiate career with 3 First Mythical Team selections.

He was nabbed the No. 5 overall pick by Barangay Ginebra in 2015 and helped the franchise clinch 4 PBA titles. (READ: Tim Cone crushed by Aric del Rosario death: ‘He always kept me grounded’)

“When you started coaching me, my perspective in life changed,” Thompson said. “For all the challenges I’ve faced in my life, I never doubted myself because you taught me to be a fighter and to endure everything.”

“For all the expletives and punches you threw at us players, we felt how you were eager to push us that we can do it.”

The Ginebra standaout said not only was Del Rosario unselfish with his basketball knowledge, he was also generous when it came to providing the financial needs of his players.

Thompson can attest to that.

“I will never forget how you asked players from the province if they still have money. They will say they don’t and you gave them your own money,” said Thompson, a Padada, Davao del Sur native.

“You made all of us feel that you’re not just a coach but also a father because you knew we’re all away from our own families.”

With Luzon placed on enhanced community quarantine, Thompson said he hopes to find a way to mourn with the Del Rosario family and pay respect to the beloved tactician for one last time.

Before joining Perpetual in 2012, Del Rosario already cemented his legacy as one of the country’s all-time best collegiate coaches when he steered the UST Tigers – whom he mentored for over a decade – to 4 straight UAAP championships from 1993-1996.

Although the Altas failed to cop an NCAA title under his watch, Del Rosario led the Altas to 3 Final Four appearances.

“Thank you for everything coach Aric! You will be missed! And you will be always in our hearts! We love you coach!” – Rappler.com