How Larry Bird and the Celtics helped coronavirus survivor Angara 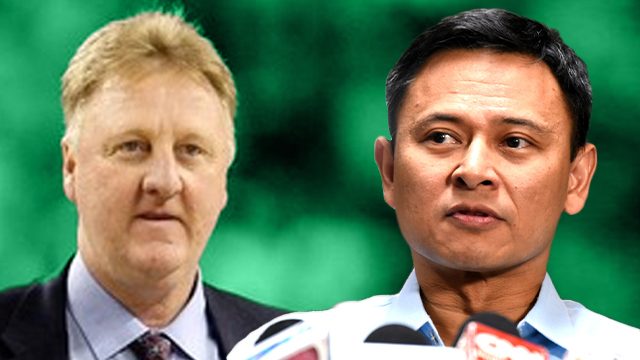 Facebook Twitter Copy URL
Copied
While recovering from COVID-19, Senator Sonny Angara says technology helped him escape back to the '80s with the Boston Celtics

These were the symptoms felt by Senator Sonny Angara before testing positive for COVID-19 in March, just two weeks following President Rodrigo Duterte’s decision to put Metro Manila on lockdown as the pandemic worsened.

As precautionary measure, Angara moved to a separate room in his home for isolation once he felt ill, although the eventual diagnosis would still come as a shock.

“I’m not really sure where I got it,” he told Rappler.

“My work as a senator brings me in contact with so many people and we had a session that week before I felt sick. Some senators and senate staffers were also diagnosed as COVID-positive. One of the staffers passed away.”

The staffer’s passing is one of over 400 deaths in the Philippines due to COVID-19. More than 6,000 people in the country have been diagnosed with the virus, while nearly 700 people have recovered.

Angara said his recovery was “aided by very good medical care,” as he spent more than a week in a hospital receiving medication while undergoing X-rays and blood tests.

“I couldn’t have any visitors so it was quite solitary and lonely,” he said. “Thank God for technology so I could do video calls with my family.”

Technology also allowed him an escape to a different time – when Larry Bird, Kevin McHale, Robert Parish, and the Celtics of the 1980s were making headlines in Boston, as well as to some of the best fights the sport of boxing has seen.

“I really missed sports and continue to miss sports as we speak.”

Back in the ‘80s, Angara actually cheered for the Showtime Los Angeles Lakers led by NBA legends Magic Johnson, Kareem Abdul-Jabbar, and James Worthy. They won 5 championships in a dominant display.

The most prominent part of those title runs came against the Celtics, the franchise that the future Philippine senator would come to cheer for when he enrolled in Harvard Law School in 2002.

“Boston really is a sports town,” he said.

Although Bird and company had already been long retired in the early stages of the new millennium, the Celtics still had a formidable team led by Paul Pierce. In 2002, they came a few wins away from making the NBA Finals.

Adding fuel to the pride of Bostonians was the success of the Bruins, Red Sox, and Patriots, who were spearheaded by a young quarterback named Tom Brady, the man who would go on to earn the reputation as the greatest NFL player in its 100-year history.

“Living there, it’s hard not to get caught up with the sports culture,” Angara said.

The player he was most impressed by, however, was Pierce, because of his “handles, shooting, and swagger.”

Years later when Pierce would team up with future Hall of Famers Kevin Garnett and Ray Allen, the senator closely monitored the Celtics, and was present for Games 4 and 5 when Boston battled the Kobe Bryant-led Los Angeles Lakers in the 2010 NBA Finals.

“It was really heartbreaking and might be the worst I’ve felt after watching a basketball game,” he said following Game 7, where Los Angeles prevailed over Boston.

“In a way, it’s great that sports channels are replaying some of the old basketball, football, and tennis matches because a lot of people really miss sports.”

Sporting events have been sidelined all over the world as an effort to fight the coronavirus.

The way Angara sees it, the absence of sports takes away an avenue for people to channel their energies, especially given the growing relationship Filipinos have had with different sports in recent years.

“I’ve seen them learn to love volleyball and football compared to a few years ago. It helps to have charismatic stars.”

Both during and post-recovery, Angara turned to YouTube to watch clips of the Celtics – both past and present – as well highlights of Liverpool FC (he studied a few years in London) and the Fighting Maroons of the University of the Philippines, his alma mater.

“As a sports fan, I really feel the vacuum in my life,” he admitted.

He also spent time reflecting on his top 3 personal favorite sports moments: watching the Jimmy Alapag-led Gilas Pilipinas defeat Korea in 2013; watching UP beat a “great” Adamson team led by the heroics of Paul Desiderio to end a 32-year finals drought in 2018; and watching his son hit tennis balls with Rafa Nadal a few years back.

Before the lockdown, Angara also had his own basketball team in the senate which competed in local leagues.

“That’s all on hold now and one really misses and appreciates the role of sports in our personal and national life,” he said.

“I’m sure I’m not the only one who feels this way. Kareem Abdul-Jabbar, the NBA great, said it best when he said sports, just like music and the arts, opens up new pathways for expression and speaks to young people in a different way.”

By finding motivation in what’s noticeable beyond the final tally, such as “Nadal’s ability to keep plugging away even when he is down two sets, Manny Pacquiao’s bravery and skill, [or] the Gilas guys throwing their bodies around against bigger players.”

And when it comes to defeating an opponent – which in this case, is COVID-19 – the senator thinks we can learn a thing or two from sports.

“Fighting the virus is like winning the most difficult match we’ve ever faced,” he said. “It will require discipline, teamwork and skill for us to succeed.” – Rappler.com