CHARLOTTE, USA – With millions around the world thirsting for sports, the documentary The Last Dance has once again put the famed ’90s Chicago Bulls team in the spotlight.

Some Filipinos could not help but reminisce about the magical run, especially since Scottie Pippen and Dennis Rodman visited the Philippines 8 years ago.

One of the highlights of the event was the reunion between Rodman and his estranged father, Philander, who has been living in the Philippines since the ’70s.

Philander, a Vietnam War veteran, had been absent in Dennis’ life for more than 4 decades. He had established himself up in Angeles City, Pampanga, where he had a small burger joint called Rodman’s Rainbow Burgers.

The restaurant sold burgers with multicolored buns, much like Dennis’ trademark colorful hair.

But true to his name, Philander had acknowledged fathering 29 children by 16 mothers.

In July 2012, the NBA star nicknamed ‘The Worm’ returned to the country for an exhibition game together with other NBA legends like Jason Williams, Clifford Robinson, Mitch Richmond, and Horace Grant.

They were up against PBA legends like Marlou Aquino, Kenneth Duremdes, Nelson Asaytono, Noli Locsin, and Vince Hizon.

In Dennis’ previous Manila visit in 2006, Philander was hoping for a reconciliation with his son. However, the former Chicago Bulls star would have none of it.

During his Hall of Fame induction speech  in 2011, one of the NBA’s all-time fiercest rebounders even said: “I never had a father.”

But Philander found hope when in a press conference to promote the 2012 game, Dennis said: “I’m gonna be glad if he shows up in the game.”

“I don’t hate my father,” he told local reporters. “Everyone here knows that my father lives in this country. I don’t hate him.”

So, Philander headed to the Mall of Asia Arena in Pasay City to watch the game with high hopes.

At his home in Pampanga, Philander told News 5 reporter Renz Ongkiko that he just wanted to tell Dennis that he did not abandon him.

“I just want to see Dennis. He’s my son,” he said. “ I just want to clear it up and rest in peace when I die so that he knew that I did not abandon him.”

Before the game, as he took his seat at the patron area, Philander  – who was wearing a red cap with the words “Yes, Dennis Rodman is my son” – said:  “I’m very excited. It’s been a long time.”

As the game was winding down, Pippen and Rodman halted the ball game with 16 seconds left to thank the fans who attended the game.

The ultimate recognition from Dennis came when he took the microphone and gave a shoutout to his father.

“I haven’t seen my father in 42 years. In 42 years, right? But he’s still my dad. But he’s right here. Right there,” said Dennis, who looked at the crowd and finally pointed to the baseline area where the older  Rodman stood and waved as fans cheered. 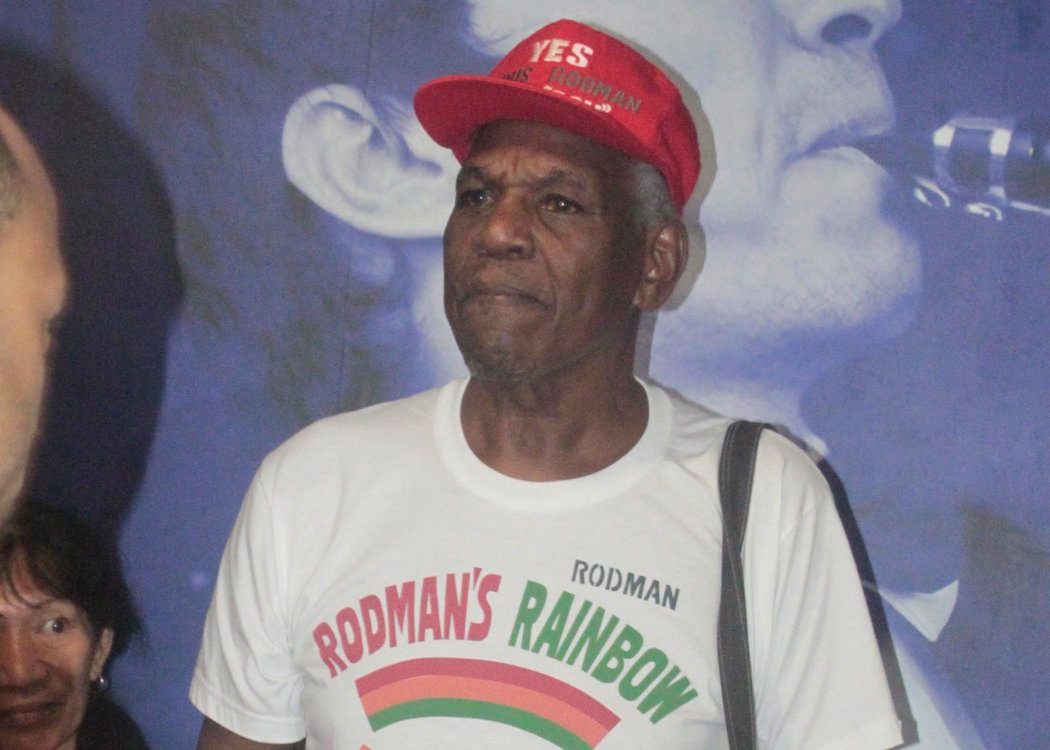 After the game, Philander had an interview with the media and a photo-op with then-US Ambassador to the Philippines Harry Thomas.

“It really shocked me. It’s the first time he called me as his father. That really touched me,” said Philander.

Soon after, he anxiously waited near the dugout out area and 30 minutes after the game ended, the Hall of Famer finally stepped out of the locker room.

A small crowd had gathered as the basketball legend slowly made his way.

They greeted each other, shook hands, and had a quick conversation. The whole thing lasting about a minute.

Philander gave his number to one of entourage staff as his flamboyant son made his way out.

“I don’t know what to say. I gave him my number and he said he’ll get in touch with me,” said Philander.

“But I believe he’s going to call, hopefully,” a visibly excited Philander said before heading back to Angeles that Wednesday evening.

Note: The author previously worked with the television network that sponsored and aired the exhibition game.