May 11, 2020 1:17 PM PHT
Agence France-Presse
Facebook Twitter Copy URL
Copied
Alex Antetokounmpo sees Europe as the faster route to the NBA, where 3 of his older brothers are playing 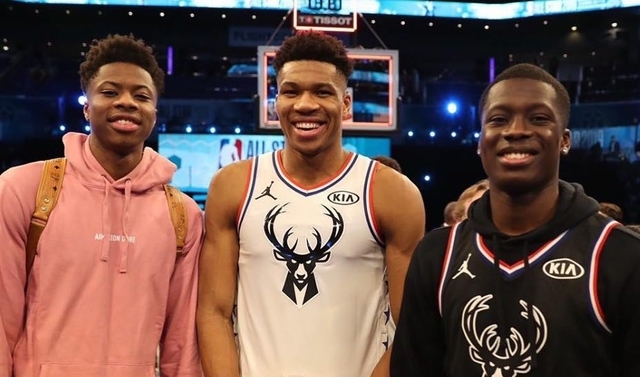 LOS ANGELES, USA – The younger brother of Milwaukee Bucks star Giannis Antetokounmpo plans to skip US college and play pro ball in Europe because he sees it as a faster route to the NBA.

Prospect Alex Antetokounmpo graduated from an American high school in Milwaukee and has received scholarship offers from several colleges, including DePaul University in Chicago.

“I want to become a pro as soon as possible,” he said. “I was born and raised in Europe. I know European basketball and the best thing for me would be to sign a contract with a European club.”

The six-foot-seven Alex was born in Greece and played forward last season for Dominican High School.

“I will have to train and compete against grown men, I will experience strong competition and pressure,” Alex said of the European move.

If he reaches the NBA, Alex would become the fourth member of his family to get there, joining older brothers Giannis, the 2018-19 league MVP; Thanasis, who also plays for the Bucks; and Kostas, who plays for the Los Angeles Lakers.

Alex moved to Milwaukee from Greece in 2013 during Giannis’ rookie season with the Bucks.

He averaged 20.0 points and 7.3 rebounds as a high school senior. – Rappler.com