LOOKBACK: When the PBA All-Stars mattered

May 15, 2020 11:24 AM PHT
Ariel Ian Clarito
Facebook Twitter Copy URL
Copied
True to form, legendary coach Baby Dalupan orchestrated a play that would go down as one of the most iconic sequences in PBA history 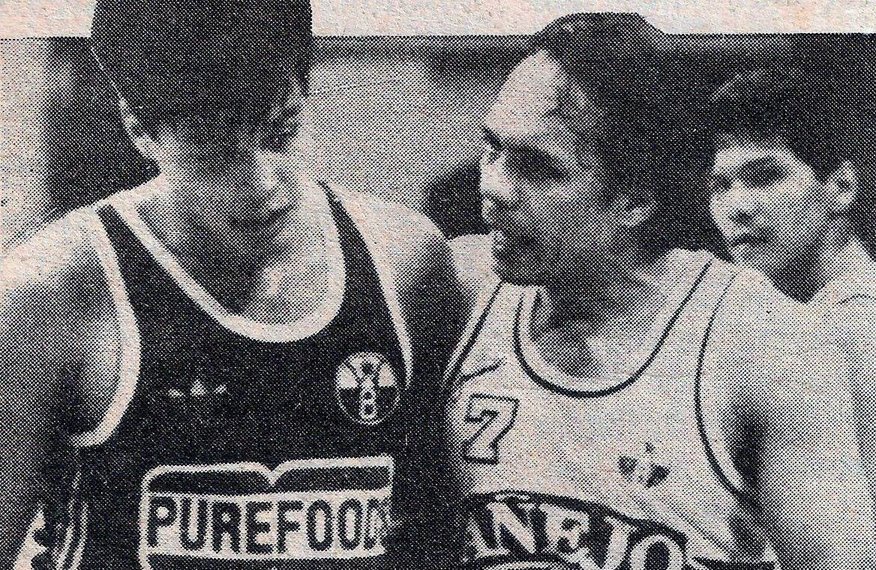 This was 31 years ago when the PBA staged the first All-Star showdown. League commissioner Rodrigo Salud institutionalized the All-Stars and made it part of the local basketball landscape.

Twenty-four of the brightest stars of the league gathered at the Ultra in Pasig on June 4, 1989. The coaching battle also offered a classic matchup. Former Crispa coach Baby Dalupan of Purefoods was the tactician for the Veterans squad, while former Toyota coach Dante Silverio of the Formula Shell Zoom Masters was tasked to mentor the Rookies-Sophomores.

Dalupan had at his disposal a team that had a good combination of experience and a bit of youth. Five players from then Grand Slam-seeking San Miguel Beer were in the lineup: Ramon Fernandez, Yves Dignadice, Samboy Lim, Hector Calma, and Elmer Reyes.

Aside from Fernandez, two other league pioneers and former MVPs were in the roster – Sonny Jaworski and Philip Cezar of Añejo Rum, who were joined by their sharpshooting teammate Joey Loyzaga.

The other Veterans were Allan Caidic and Manny Victorino of Presto, Yoyoy Villamin of Alaska, and Arnie Tuadlles of Shell.

The Rookies-Sophomores team was composed of a fresh breed of stars who turned the PBA into their own playground with their high-flying, power-playing, and exciting brand of basketball.

They had the edge in teamwork as 9 players in the lineup were members of the 1987 Philippine national team: Alvin Patriimonio, Jerry Codiñera, Jojo Lastimosa, Nelson Asaytono, and Dindo Pumaren of Purefoods, Bong Alvarez of Alaska, Zaldy Realubit of Presto, and Benjie Paras and Ronnie Magsanoc of Shell.

The rest of the squad were Bobby Jose of San Miguel, Romeo Dela Rosa of Shell, and Elmer Cabahug of Alaska.

Packed to the rafters

Silverio fielded a tall starting 5 – centers Codiñera and Realubit, two forwards in Jose and Dela Rosa, and one guard in Pumaren.

This tactic backfired for the Rookies-Sophomores. The lack of ballhandlers to help out Pumaren resulted in sloppy basketball marked by numerous turnovers in the early part of the game. Tuadles, Calma, and Caidic had a heyday in transition as the Veterans erected a dozen point lead.

With less than 5 minutes left in the 1st quarter, the coliseum that was packed to the rafters erupted in delirious revelry. Dalupan instructed Fernandez and Jaworski to check into the game at the same time.

A few possessions later, the crowd went absolutely wild when Jaworski inbounded to El Presidente, who then issued a no-look dish back to the Big J. (READ: Ultimate rivalry: Big J vs El Presidente)

The 1st quarter ended with the Veterans running more to forge ahead, 35-21. One thing that was becoming glaring was that the Veterans enjoyed an advantage in crowd support.

The Rookie-Sophomores came back in the 2nd quarter on a counter-attack led by gunners Cabahug, Magsanoc, and Lastimosa. With Paras and Patrimonio establishing their presence down low, the younger team was finally able to get their running game going and tie the score at halftime, 59-all

The game was close the rest of the way as neither team was able to build a double-digit lead. With less than a minute left in the ballgame, the Veterans were ahead 125-119 and seemed well on their way to a comfortable victory. The youngsters, though, did not have any quit in them.

Magsanoc and Cabahug connected on triples which sandwiched Caidic’s two free throws to cut the deficit down to two. Caidic was fouled and converted two more free throws to give the Veterans more breathing room with a four-point advantage.

Paras responded quickly back with an easy two. Jaworski then threw an outlet pass to Fernandez, who was fouled by the Rookies-Sophomores to stop the clock.

El Presidente, though, uncharacteristically missed one from the stripe, leaving the door open for the Rookies-Sophomores to tie the count with less than 10 seconds left in the ballgame.

Off the inbound, Lastimosa received the ball at the corner and converted a difficult three to forge a deadlock at 130 with 4 seconds remaining on the clock. Dalupan was forced to sue for time.

True to form, the Maestro orchestrated a play that would go down as one of the most iconic sequences in PBA history. Jaworski was called upon by his former college coach to throw in the ball.

Dalupan gave Jaworski two options: pass the ball to Caidic at the perimeter or to the Big J’s bitter rival, Fernandez. Jaworski decided to go to Fernandez.

As soon as he received the inbound, Fernandez spun to his right and left Paras by half a step. The PBA’s first four-time MVP converted on a baseline undergoal stab as the buzzer sounded. The Veterans won, 132-130.

Cabahug was named MVP of the game after leading all scorers with 24 points. The Veterans, though, showed more balanced offense with 8 players scoring in double figures.

Fernandez and Tuadles topscored for the Veterans with 20 points apiece. The Veterans enjoyed a huge edge in fastbreak points, 49 as against the 28 scored by their younger opponents.

Fernandez and Jaworski played together for 20 solid minutes. This was by design, as revealed by Dalupan, who said in an interview after the game: “Talagang pinagsabay ko ang dalawa para maaliw ang mga tao (I really fielded them together so fans would enjoy).”

And everyone sure did. – Rappler.com