What is LA Tenorio chasing? 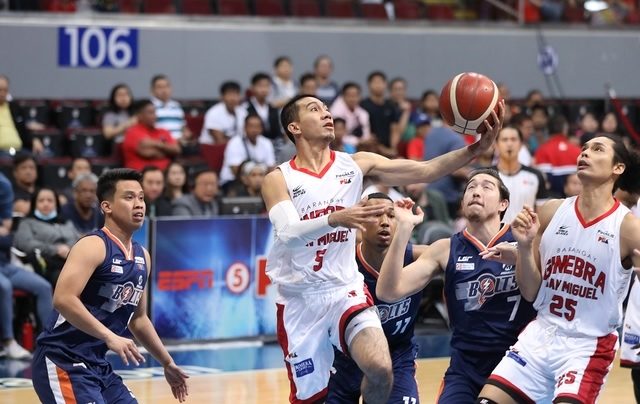 MANILA, Philippines – The confetti exploded from canisters left and right, simultaneously as the final and loudest buzzer of the PBA Governors’ Cup rang over the Mall of Asia Arena on a cool January night.

The game barker managed to scream the final result into his mic: after powering past the same foe a third straight time, Barangay Ginebra – the crowd-favorite of Asia’s oldest basketball league – can be called champions another time.

Stanley Pringle, arguably the PBA’s most talented Fil-foreigner, held the basketball as the final seconds melted away from the dying game clock.

He was a star worthy of MVP consideration in his previous stop, then made the most of his opportunity to be in the finals after, inevitably, a championship contender acquired him for a moderate price.

In some way, his crowning moment finally arrived.

But Japeth Aguilar was the real star of the night.

A 25-point, 8-rebound, and 4-block masterpiece worthy to win Finals MVP. His presence was strongest in the deciding quarter, where he scored at will and was an unsolvable problem for the other side’s three-time Best Import, Allen Durham.

Like many great players, it took the right coach, teammates, and system for Aguilar to shine. Paired with Tim Cone, an owner of 22 championships and two Grand Slams, Japeth became a superstar.

Somewhere in the celebration, LA Tenorio looked for Cone. It was him who handed Pringle the basketball before the final buzzer.

The former Blue Eagle, now 35 years old, isn’t the speeding bullet of a slasher he once was in his prime. But as a driving force, calming presence, and triangle runner at point guard to a team loaded with talent, he is the perfect choice.

“I didn’t even congratulate him,” recalled Tenorio of the moment he finally found his coach.

Throughout the finals, Tenorio played with a heavy heart. The eruption of Taal Volcano had struck close to home for the Nasugbu, Batangas native. This victory, dedicated to his family, was the most special one in a while.

And yet, he was already thinking of what was to come.

“I didn’t say anything, but, ‘Coach, let’s get the All-Filipino Championship.’”

It’s one of the oldest and most popular feelings about the PBA’s three-conference calendar.

To be a champion of the Commissioner’s or Governors’ Cup puts a player in the record books just the same as winning the All-Filipino Cup. Yet many former and current players believe there’s a stronger sense of pride about winning the conference where there are no imports.

“Everyone is gunning for the All-Filipino – it’s very prestigious as a Filipino basketball player, as a Filipino pro player,” Tenorio told Rappler.

(In the PBA, you’d only get a ring if you win the All-Filipino Championship.)

Tenorio’s recent chance to earn that ring was back in March 2017, but Ginebra succumbed to San Miguel after 5 matches.

That was when the Beermen won their third of 5 straight All-Filipino crowns – a dynasty led by the Super 5 of June Mar Fajardo, Arwind Santos, Chris Ross, Alex Cabagnot, and Marcio Lassiter.

Entering this year’s AFC, the dynasty was vulnerable.

Fajardo, the winner of 6 straight MVPs, was listed out for the foreseeable future after his leg fractured. With the best and biggest man sidelined, the All-Filipino title felt open for the taking, a first in the last half-decade.

First, Ginebra lost Greg Slaughter, the PBA’s other biggest man, who has the nickname “Gregzilla.”

The twin-tower pairing between Japeth and Greg would have given them a size advantage against any opponent.

If there’s one thing you can’t teach in basketball, it’s height.

“Yung news about si Greg, na nawala siya – maybe may possibility ng positive side,” was Tenorio’s opinion about it.

(The news about Greg leaving, maybe there’s a positive side to it.)

Second, in the only game played from the PBA season, San Miguel dominated Magnolia, their rival and another contender for the crown. Even without June Mar, the Beermen sent a message loud and clear: they plan to win a sixth straight championship.

And third, the whole league, country, and world was stopped in some way or another by the COVID-19 pandemic.

Commissioner Willie Marcial and the league board are patiently waiting until August to determine the fate of the 45th Season, but the question of “when” the PBA should resume will be asked only after the question “if” it can resume is answered.

And even if it does resume, many other questions remain underneath:

Will games be played without fans?

What are the safety precautions going to be?

What happens if a player tests positive for coronavirus?

Will players be in playing shape after a long extended vacation?

“It’s hard to sleep at night knowing that I’m not doing anything the next day,” admitted Tenorio.

“To be honest, at first the adjustment was hard, because we’re used to always being out – going out, going to practice, doing extra work outside, going to the malls.

“But in time, I got used to it and I like the feeling that you’re with your family the whole time, knowing they’re safe.”

What Tenorio grew accustomed to suddenly changed, but he still works out at home every day, with help from the mobility-centered program sent to him by Ginebra’s staff, and the gym equipment which was delivered to his home.

He also makes sure to maintain his shooting stroke at his home court.

“At this point in my career, it’s hard for me to get in shape right away,” acknowledged the seasoned veteran.

“If I were younger, maybe [after] one week I’d be ready to play, I’m all game. I know my body really well. I know when I need to work out. I think my motivation is at the end of the day, I’m still the one who will benefit.”

What keeps that will strong?

What makes him want to, as LeBron James would say, keep striving for greatness?

“Until I don’t get that championship, I will not stop.”

Nearly two decades ago, a college freshman named LA Tenorio put himself on the map of Philippine hoops with a 30-point explosion in La Salle’s UAAP title-clinching conquest of Ateneo.

It was one of the 83-year-old collegiate league’s memorable battles, and an earmark in the rich Archers vs Eagles rivalry.

A year later, Tenorio and his teammates in blue clinched retribution by returning the favor to their adversaries in green.

He declared for the PBA Draft in 2006, when he was selected fourth by, ironically, the same team Ginebra seeks to dethrone.

On the road to getting the Philippines back to the global stage of basketball, his leadership proved valuable.

And with all of that in mind, there’s a shocking revelation.

“I feel like I’m not yet a complete player as long as I don’t get that All-Filipino Championship,” said Tenorio.

The All-Filipino crown – is it the only thing stopping Tenorio from entertaining the thought of hanging up his sneakers? To call it quits?

After all, he’s given more than half his life to basketball, from learning how to play under renowned San Beda high school coach Ato Badolato, to chasing championships with the legendary Cone.

“I’m not saying that if I get that championship, I will retire already,” he clarified, because he says there are 3 to 5 more years in his playing career.

“It’s just… I’m motivated to get that championship, that’s why I keep myself going and I take care of my body even in this lockdown period.

Tenorio sounded confident and determined. Could he possibly play until he turns 40?

“Aside from the championship, I’m chasing greatness.”

The truth is, there’s no objective standard for what “greatness” is.

Maybe it depends on who you ask, who you seek to prove wrong, or who you try to impress. It really depends on you. That’s why it’s subjective.

So what is even more greatness for a man who has done many great things since a basketball was first put in his hands?

“It’s really to be more of a better player, a better person, a better teammate,” Tenorio explained.

For years he idolized Olsen Racela, the point guard of the Beermen from their title runs back in the early 2000s, and currently his assistant coach at Ginebra.

Tenorio even patterned his game after “Ra-Ra,” which is why it’s not a coincidence both men have enjoyed long and similar careers. Racela retired when he was 40.

One day, LA wants to be an Olsen to another up-and-comer.

“To be known… as LA Tenorio, an Ironman, knowing he was very disciplined, he was mentally tough, and his values inside and outside the playing court are something else.”

“I have championships, individual awards, international and local, but for me, it’s more than that. More than basketball for me.”

Time and the record books will detail how LA Tenorio is remembered, and how much of it was beyond playing basketball.

But don’t think about it yet, because it’s not coming soon.

He’s got a ring to win. – Rappler.com