What shoes did Jordan wear in his most iconic NBA moments? 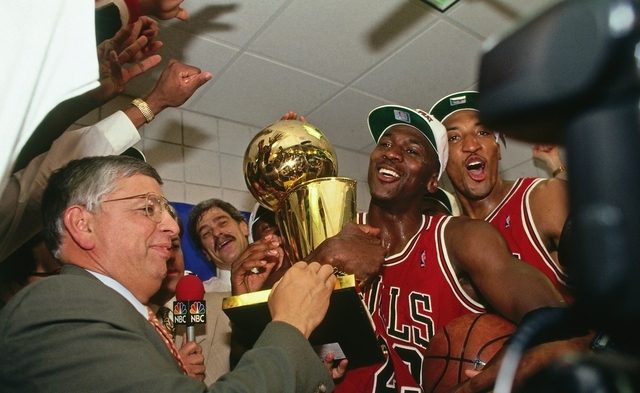 MANILA, Philippines – Ever since Michael Jordan started his career in the NBA, his own shoe line has been a part of his identity.

With Adidas, the company Jordan initially wanted to sign with, failing to offer him a shoe contract, the man widely regarded as the greatest of all time fell into the welcoming hands of Nike.

Air Jordan was born and eventually became a hit worldwide, selling more than $100 million in just its first year.

Jordan winning championships and individual awards just increased the hype and demand surrounding his brand of footwear as basketball fans line up at stores to buy his shoes and “be like Mike.”

Here are the shoes Jordan wore in his most iconic moments: The Jordan 1 is arguably the most iconic model in the Air Jordan line, so it was only fitting that Jordan wore it in one of his most memorable playoff moments.

Donning the “Chicago” colorway, Jordan set an NBA record for most points in a playoff game with 63 points on top of 3 steals and 2 blocks against the Boston Celtics in Game 2 of their first-round clash in 1986.

Although the Chicago Bulls lost in overtime, 131-135, Jordan left a big impression in the league and earned huge praise from Celtics star Larry Bird, who was the MVP that season.

“I think he was God disguised as Michael Jordan,” Bird famously said.

What is more impressive is that the record, which Los Angeles Lakers legend Elgin Baylor held for 24 years before Jordan broke it in just his second season, still stands after more than 3 decades. From the MVP award to the Dunk Contest trophy, Jordan won it all in the NBA.

Lacing up the Air Jordan 3 “White Cement” in the 1988 Dunk Contest, Jordan lived up to the moniker “His Airness” by jumping from the free throw line and slamming home an elegant dunk – twice.

Jordan already pulled off the move in the semifinals, but decided to repeat it in the finals to beat Atlanta Hawks star Dominique Wilkins.

Needing at least 49 points to win his second straight Dunk Contest crown, Jordan effortlessly converted the free-throw-line dunk for a perfect score of 50. When it comes to Jordan game-winners, “The Shot” against the Cleveland Cavaliers in the first round of the 1989 playoffs will always come to mind.

As the Cavaliers pushed the Bulls on the brink of their fourth first-round exit in the last 5 seasons with a one-point lead in the dying seconds of Game 5, Jordan put matters into his own hands and drained the iconic buzzer-beater.

Jordan, with 3 seconds left on the clock, avoided a trap from Larry Nance to receive the inbound pass and sank a jumper from the top of the key over Craig Ehlo as he finished with 44 points for the 101-100 escape.

What followed is one of the most immortalized celebrations in NBA history as Jordan – wearing the Air Jordan 4 Retro “Bred” – leapt into the air and fist-pumped.

The shot paved the way for Jordan to reach the conference finals for the first time in his career, but the Bulls eventually succumbed to the Detroit Pistons. As they finally got over the hump against the Pistons in the 1991 playoffs with a resounding sweep in the conference finals, Jordan and the Bulls set up a finals date with Magic Johnson and the Showtime Lakers.

The Lakers nailed the finals opener by a single possession, but Jordan and the Bulls bounced back with aplomb by winning the next 4 games for their first NBA crown in franchise history.

With the Air Jordan 6 “Black Infrared” on his feet, Jordan put up 30 points, 10 assists, 5 steals, 4 rebounds, and 2 blocks to help the Bulls close out the Lakers as the NBA saw the beginning of a new dawn. Near the end of the 1991-1992 season, Jordan was undoubtedly the best player in the planet as he led the Bulls back to the finals and won his third MVP plum.

So when Jordan was compared to Clyde Drexler in the run-up to Game 1 of the Bulls’ best-of-seven finals series against the Portland Trail Blazers, he took offense.

Just to prove that he is a far superior player than Drexler, Jordan torched the Blazers star with 6 three-pointers in the first two quarters, which at the time was an NBA record for most triples in a half of a finals game.

After hitting his sixth three-pointer, Jordan – wearing the Air Jordan 7 Retro “Raptor” – delivered the prominent shrug as he ended the first half with a whopping 35 points, which remains an NBA Finals record.

Jordan scored only 4 points for the rest of the game, but the Bulls still cruised to a dominant 122-89 victory for a 1-0 series lead. Jordan had his father James by his side in his first 3 championships, but as the Bulls chased a fourth title in 1996, the patriarch had already been dead for years after being murdered in 1993.

The Bulls clinched the first 3 games of the finals, but Gary Payton, Shawn Kemp, and Seattle Supersonics won the next two matches to trim their series deficit to 2-3, with a chance of knotting the best-of-seven duel in the next outing.

As fate would have it, Game 6 coincided with Fathers’ Day.

Despite missing 14 of his 19 field goal attempts, Jordan managed to finish with 22 points, 9 rebounds, 7 assists, and 2 steals in the Bulls’ 87-76 triumph to bag his first title since the death of his father.

Jordan – sporting the Jordan 11 “Bred” – let out his emotions in the locker room as he cried on the floor and hugged the game ball.

“To my wife, to my kids, to my mother, my brothers, and sisters, this is for daddy,” Jordan said after the game. Jordan is considered the greatest of all time not just because of his exceptional basketball skills but also his unwavering will to win.

His steely resolve was in full display in Game 5 of the 1997 NBA Finals against the Utah Jazz as Jordan battled through flu-like symptoms to steer the Bulls to a 90-88 win that gave them a pivotal 3-2 series lead.

Jordan chalked up 38 points, 7 rebounds, and 3 steals to propel the Bulls, which trailed by 13 points after the opening quarter, on the verge of their fifth title. With a sixth championship on the line and the end of the Bulls’ era on the horizon, Jordan decided to play his final game for the franchise wearing shoes which at the time were still not in the market: the Air Jordan 14.

The shoes were inspired by Ferrari, a luxury sports car brand known for winning, which what Jordan exactly did against the Jazz.

With the Jazz looking to force a rubber match as they led 86-85 in the dying seconds of Game 6 of the 1998 NBA Finals, Jordan stripped Karl Malone of the ball and then drilled in the game-winning shot over Bryon Russell.

Jordan wound up with 45 points and 4 steals in his final game before his second retirement from the NBA.

The “Bred” colorway of the Air Jordan 14, which Jordan broke out in that particular finals game, was released in 1999 and earned the nickname “Last Shot” in reference to the unforgettable jumper. – Rappler.com