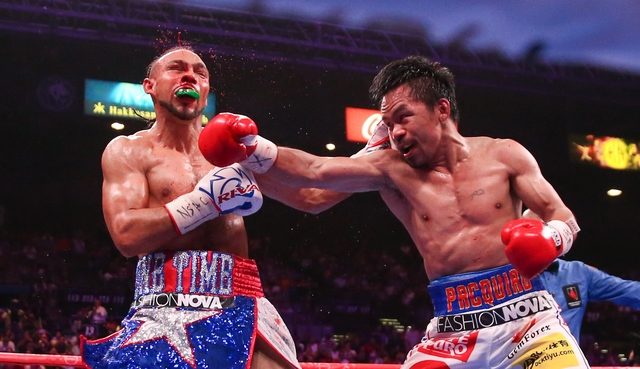 Will a Pacquiao fight against Terence Crawford follow soon?

The answer is uncertain owing to the coronavirus pandemic, but Arum believes Pacquiao, his former cash provider, is ready to tangle with Crawford, his new prized ward at Top Rank Promotions, in a welterweight unification.

“I’ve talked to Manny via Zoom, first time I talked to him face-to-face in a while,” Arum told Australian boxing promoter/manager and Philboxing contributor Peter Maniatis in an interview on Sunday, May 24.

“Manny was getting ready to go bed, it was morning in California, and he is ready to go [against Crawford].”

Last month, Arum bared members of Team Pacquiao approached him regarding the possibility of staging a megabuck bout between the fighting senator, the World Boxing Association titlist, and Crawford, the World Boxing Organization champion.

Due to the prevailing conditions in the United States brought about by the coronavirus, the Hall of Fame promoter is looking at other countries as possible venues.

“Manny is ready to do that [Crawford] fight and we’ll try to do that out of the [United States],” Arum added.

If Pacquiao-Crawford pushes through outside the US, with the Middle East and Macau being trumpeted as possible venues, Arum intends to charge a hefty site fee to recoup some of the gate receipts losses.

What makes Arum optimistic is Pacquiao’s desire to hold the Crawford fight, if ever, within the year.

“Manny wants the fight to happen this year because he’s running for political office next year, for the presidency,” said Arum, unaware that the Philippine presidential elections is set in 2022.

Crawford, for his part, insists he has been chasing Pacquiao since 2015.