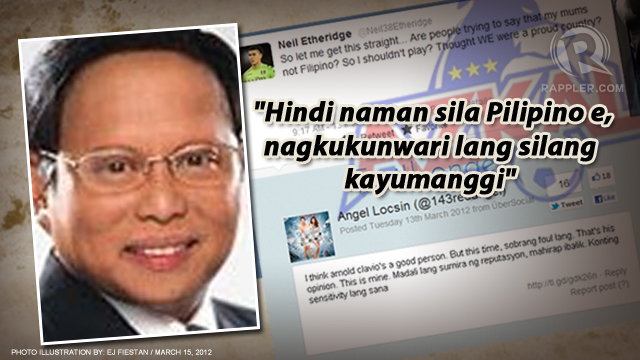 MANILA, Philippines – GMA Network Inc has defended its anchor, Arnold Clavio, in the face of alleged racial slurs he made against the Philippine Azkals.

In a statement, GMA Network said it sees nothing racist, discriminatory, libelous, or malicious in the commentaries of Clavio and his co-anchor, Rhea Santos, on their morning show Unang Hirit.

In a letter addressed to the network’s president and COO, Gilberto Duavit Jr, the Philippine Football Federation had asked GMA Network to investigate the matter and to sanction Clavio for his “scurrilous and discriminatory words.”

In a statement, however, GMA Network said Clavio made his remarks not as part of the network’s news reportage, which it said, focuses on facts, not opinions.

(The statements being complained about were part of the unscripted discussion of Unang Hirit hosts during the program’s commentary segment during which they exchanged opinions and views on the issue.)

GMA Network stressed that the Constitution protects the rights of the hosts to express their opinions.

The network also regretted the PFF’s interpretation of Clavio’s statements.

Earlier this week, Clavio trended on Twitter after his remarks outraged netizens. – Rappler.com