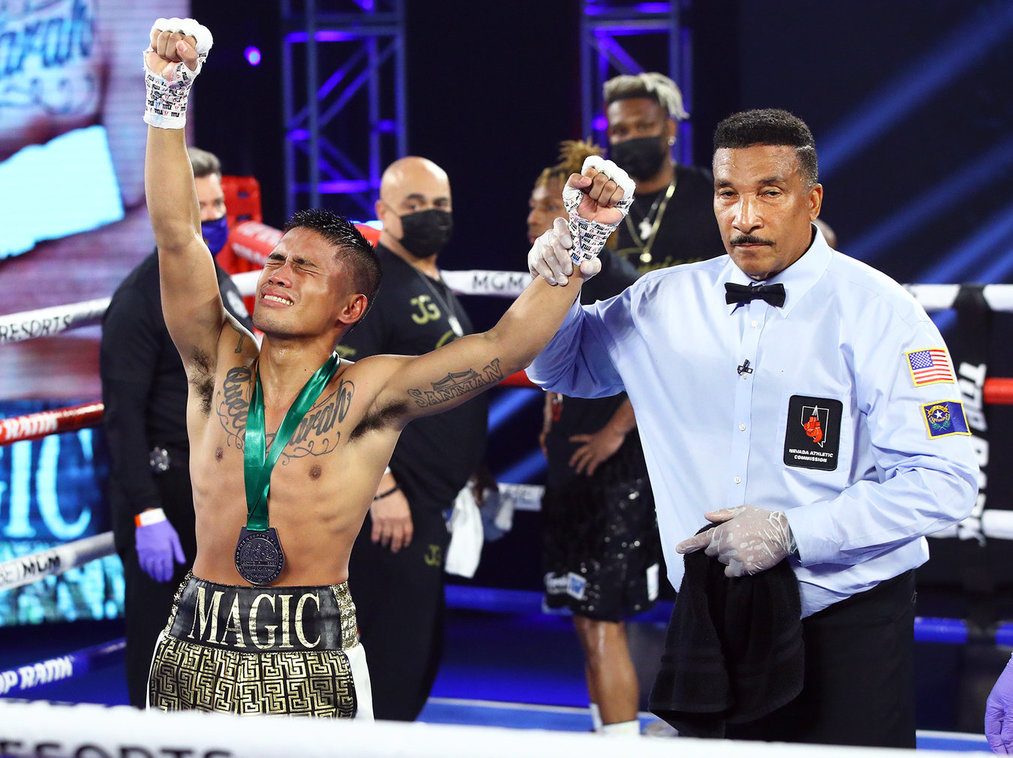 MANILA, Philippines – Mike Plania entered the ring as a huge underdog. He left it a probable world champion.

Unloading his trademark left hook,  the prized find from General Santos City floored American Joshua Greer in the 1st and 6th rounds en route to a majority decision, 94-94, 96-92, and 97-91, in their 10-round 120-pound encounter at MGM Grand Conference Center in Las Vegas on Tuesday, June 16 (Wednesday, June 17, Philippine time).

The 23-year-old Plania thus provided Filipino boxers with a paved path to follow in their return to the international arena after being stalled by the COVID-19 pandemic.

Given little chances by oddsmakers, Plania caught Greer – ranked No. 1 challenger to Johnriel Casimero’s World Boxing Organization and No. 2 to Naoya Inoue’s International Boxing Federation bantamweight crowns – napping with a snappy blow to the face for the knockdown midway of the 1st round.

Plania sneaked in another springy left to the jaw and put down Greer again late in the 6th round before cruising to his 24th win, ninth in a row and fourth straight in the United States, against 1 loss, 12 by knockout.

The 26-year-old Greer, dubbed  “Night, Night” for putting his opponents to sleep, absorbed his second loss against 22 wins and 1 draw.

Though Plania – a 16-1 underdog heading into the fight – will barge into the top 10 of the 118-pound division, his handler, Sanman head JC Manangquil, said he’ll continue fighting as a super bantam under chief trainer Moro Fernandez.

As to what’s next for one of his star fighters, Manangquil, who was unable to make the trip to Las Vegas due to limited flights, said he’ll allow Plania to celebrate his victory and then bring him back home as soon as possible to be reunited with his family.

Plania, after all, has lived up to his “Magic” moniker in the headliner of the closed door card held by Top Rank Promotions and beamed on ESPN.

Two huge knockdowns set the tone, and Mike Plania pulls off the upset behind a vicious lead left hand